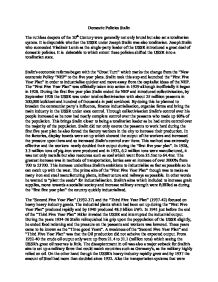 The Domestic Policies of Stalin

Domestic Policies Stalin The ruthless despots of the 20th Century were generally not only brutal but also set a totalitarian system. It is disputable whether the USSR under Joseph Stalin was also totalitarian. Joseph Stalin who succeeded Vladimir Lenin as the single-party leader of the USSR introduced a great deal of domestic policies. It is debatable to which extent these policies shifted the USSR into a totalitarian state. Stalin's economic reforms began with the "Great Turn" which marks the change from the "New economic Policy "NEP" to the five year plans. Stalin took this step and launched the "First Five Year Plan" in order to industrialise quicker and move away from the capitalist ideas of the NEP. The "First Five Year Plan" was officially taken into action in 1929 although inofficially it began in 1928. During the first five year plan Stalin ended the NEP and introduced collectivisation, by September 1928 the USSR was under total collectivisation with about 25 milliion peasents in 200,000 kolkhozi and hundred of thousands in paid sovkhozi. By doing this he planned to broaden the communist party`s influence, finance industrialisation, organise farms and bring the main industry in the USSR under state control. ...read more.

Also the transportation systems that were derived during first two "Five Year Plans" were further broadened, by 1937 there 136,000 and had more than pentupled since 1932. In contrast the amount of luxury commodities decreased such as vodka where 72 million decalitres where produced in 1932 and only 44.3 md in 1940. This shows that Stalin's grip on the poppulation tightened because he made them work harder for less luxury, which shows him as a totalitarian leader. After the second World War was over in May 1945 Stalin introduced the "Fourth Five Year Plan" (1946-1950) and "Fifth Five Year Plan" (1951-1955). They were mainly established to build up the USSR again and re-industrialise and although the USSR had been devastated during World War 2 Stalin promised that the USSR would lead the world in industrial development by 1960. Colossal losses were borne by the industrial sector, the manpower, railways, infrastructure and agrarian sector. Stalin and the USSR had no alternative but to ask the USA for a reconstruction aid. The disagreement upon this aid later led to the start of the cold war. In 1953 halfway through the "Fifth Five Year Plan" Stalin died which marked a radical change in the USSR's domestic policies. ...read more.

To conclude the the era of "The Great Purges" Stalin ordered for Trotsky's death which meant that all old Bolshevicks were dead. On the 5th December 1936 the USSR adopted "The Stalin Costitution of 1936" which was one of the most democratic constitutions of all times and which for example included, "the right to demonstrate", "freedom of speech and press" and "freedom from arbitrary arrest" to just name a few. The consitution was of course made up and absolutely untrue. It's purpose was for one to show the world how democratic the USSR was and also to act as propaganda to the people. Ironically Bukharin and Radek who wrote this false constitution and said that there was "freedom from arbitrary arrest" were murdered shortly after it was published. Stalin's policies between 1928 and 1953 had a few primary aims which included to industrialise and create a strong military force. Nearly all his domestic policies aimed at controlling the people and eliminating those in his way, the most prominent example of this were "The Great Purges" between 1932 and 1940 in which he killed and imprisoned anyone he found threatening towards his position as leader of the USSR. While doing this he created a communist state which was brutal, dictatorial and totaliarian. ...read more.