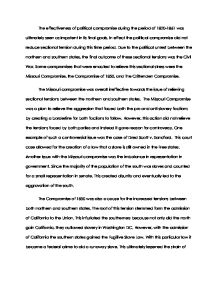 The effectiveness of political compromise during the period of 1820-1861

The effectiveness of political compromise during the period of 1820-1861 was ultimately seen as impotent in its final goals. In effect the political compromise did not reduce sectional tension during this time period. Due to the political unrest between the northern and southern states, the final outcome of these sectional tensions was the Civil War. Some compromises that were enacted to relieve this sectional stress were the Missouri Compromise, the Compromise of 1850, and The Crittenden Compromise. The Missouri compromise was overall ineffective towards the issue of relieving sectional tensions between the northern and southern states. The Missouri Compromise was a plan to relieve the aggression that faced both the pro and anti slavery factions by creating a borderline for both factions to follow. ...read more.

This created disunity and eventually led to the aggravation of the south. The Compromise of 1850 was also a cause for the increased tensions between both northern and southern states. The root of this tension stemmed form the admission of California to the Union. This infuriated the southerners because not only did the north gain California, they outlawed slavery in Washington DC. However, with the admission of California the southern states gained the Fugitive Slave Law. With this particular law it became a federal crime to aid a runaway slave. This ultimately lessened the strain of sectional tensions between the north and south. This shows that the compromise was somewhat effective in the relief of sectional pressure. ...read more.

However, this compromise did not gain popularity in the senate because it favored the southerner's interests rather than the desires of the north. In effect this act further alienated the southern citizens of the United States showing that the northerners had a larger influence on the government. This Compromise in reality further separated the south from the north and further increased sectional tension within the United States. Overall, the compromises that were enacted in order to stop the sectional tension within the United States were ultimately fruitless. This can be seen in the various political movements such as the Missouri Compromise, the Compromise of 1850, and The Crittenden Compromise. These actions ultimately created more tension between both the northern and southern factions which in effect lead to the separation of the union. ...read more.