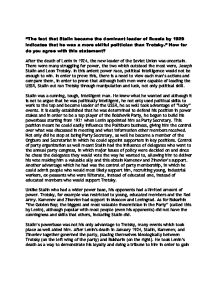 &quot;The fact that Stalin became the dominant leader of Russia by 1929 indicates that he was a more skilful politician than Trotsky.&quot; How far do you agree with this statement?

"The fact that Stalin became the dominant leader of Russia by 1929 indicates that he was a more skilful politician than Trotsky." How far do you agree with this statement? After the death of Lenin in 1924, the new leader of the Soviet Union was uncertain. There were many struggling for power, the two which outstood the most were, Joseph Stalin and Leon Trotsky. In this ardent power race, political intelligence would not be enough to win. In order to prove this, there is a need to view each man's actions and compare them, in order to prove that although both men were capable of leading the USSR, Stalin out ran Trotsky through manipulation and luck, not only political skill. Stalin was a cunning, tough, intelligent man. He knew what he wanted and although it is not to argue that he was politically intelligent, he not only used political skills to work to the top and become leader of the USSR, he as well took advantage of "lucky" events. ...read more.

Stalin's powerbase was not his only advantage to Trotsky, many events which took place as well aided him. After Lenin's death in January 1924, Stalin, Kamenev, and Zinoviev together governed the party, placing themselves ideologically between Trotsky (on the left wing of the party) and Bukharin (on the right). He took Lenin's death as a way to demonstrate his loyalty and doing a tribune to him in order to gain popularity. He as well tricked Trotsky into not showing up to the funeral by giving him a wrong date which affected Trotsky's reputation. An example of political strategy used by Stalin's to his rise to power is the way that he manipulated his opponents and played them off against each other in order to eliminate each one. His first target was the left wing. Together with Zinoviev and Kamenev, Stalin outdid Trotsky by campaigns questioning his loyalty to Lenin, this breaking up the left wing. When Trotsky was finally rid of, Stalin then turned on Kamenev and Zinoviev and joined Bukharin and Rykov (right wing) ...read more.

Trotsky was beaten by Stalin in the struggle for power due to his many weaknesses. Amongst these was the fact that he was ill and since a Jewish, Stalin created the image of Trotsky of being an isolated figure, a posturing Jewish intellectual whose international revolution threatened the security of the USSR. Another disadvantage Trotsky had was that he kept quiet in many occasions, such as when Lenin's Testament was not made public and was overran by opponents instead of overrunning them such as Stalin did. He as well was feared of becoming a dictator because of his position in the Red Army, his policy of "Permanent Revolution" and his arrogance. In conclusion, although both Trotsky and Stalin to a certain point were both politically skillful, Stalin outmaneuvered Trotsky in many aspects due to many events he had luck on and many situations which he took advantage of. Stalin demonstrated on being more quick witted than Trotsky in the sense that he was willing to step on who ever was needed to, and doing what was needed to reach the top, unlike Trotsky. ...read more.