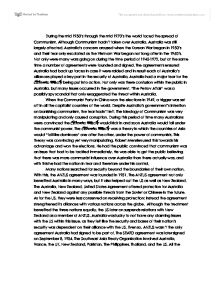 The Fear of Communism and its Effects on Australia in the 1950s and 60s.

During the mid 1950's through the mid 1970's the world faced the spread of Communism. Although Communism hadn't taken over Australia, Australia was still largely affected. Australia's concern aroused when the Korean War began in 1950's and their fear only escalated as the Vietnam War began not long after in the 1960's. Not only were many wars going on during the time period of 1945-1972, but at the same time a number of agreements were founded and signed. The agreements ensured Australia had back up forces in case it were raided and in result each of Australia's alliances played a key part in the security of Australia. Australia had a major fear for the domino theory being put into action. Not only was there confusion within the public in Australia, but many issues occurred in the government. "The Petrov Affair" was a possibly spy scandal that only exaggerated the threat within Australia. When the Communist Party in China won the elections in 1949, a trigger was set off in all the capitalist countries of the world. Despite Australia's government's intention on banishing communism, the fear hadn't left. The ideology of Communism was very manipulating and only caused corruption. During this period of time many Australians were convinced the domino theory would kick in and soon Australia would fall under the communist power. ...read more.

The Korean War took place on June 25th, 1950. This war had a significant impact on Australia. During this time Australia had assumed the domino theory was in play, and was in great fear. Although the Korean War was between the communist and non-communist forces in Korea, Australia felt like they had to step in. Australia felt that if they hadn't taken action in Korea, their security would've been at high risk and they weren't willing to jeopardize that. The communist aggression in Korea was very concerning, and so Australia did what they could to help out the non-communist Koreans. Australia sent over forces like the Royal Australian Navy, Royal Australian Regiment as well as the Royal Australian Air Force. Over all, around 118,000 lives were spared in the Korean War. This sent a clear message as to how serious Australia was when it came to stopping the spread of communism. They tried to do anything in their power to help keep it spreading any further south of Asia than it already was; in other words, they wanted communism to stay as far away as possible from Australia. The Korean War ended when the Armistice was signed and both forces ceased fire. Although the Armistice was signed, the War is still legally going on. In 1962, Australia's dedication towards diminishing communism continued as the Vietnam War began. ...read more.

The message I believe the artist John Frith was trying to convey was the situation Australian troops were in when fighting in Vietnam. As shown in the cartoon, Australians simply had hand guns and were shooting from muddy environments whilst defending themselves from missiles being launched from helicopters. The Words in the cartoon "The Viet Cong Can't Win!" speaks volumes and volumes on how much pressure was put onto the lives of the soldiers. They came to Vietnam with the intention of putting a halt to the spread of Communism, but they felt at a disadvantage considering the condition of the environment they were thrown into. Not only did the Australian soldiers feel ill-equipped but they were aware they were put into a no-win situation and Frith's cartoon just emphasizes this point. I believe this illustration has much value towards historians. Although many statements are made in textbooks and other written sources, it's always a nice change to be able to visualize a scene in the war, without it being too emotional or confronting. Frith's cartoon is a more subtle illustration of the war, but is still able to pass the message clearly. With his illustration not only do historians but the public as well are able to picture for themselves the conditions and environment the soldiers were in. The illustration shows the viewer how much of a disadvantage they were, and hopes for the view to be able to sympathize for those who had to face such conditions. ...read more.