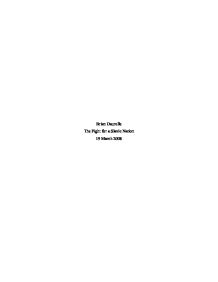 The Fight for a Slavic Nation

Brian Daurelle The Fight for a Slavic Nation 19 March 2008 The middle and late parts of the nineteenth century were the last ages of the multi-national empires which had dominated Europe previously. New states were being set up with borders determined by the geographical distribution of certain national groups, as per the doctrine of Self Determination; the old empires which had governed over whatever territories and peoples they could conquer were crumbling into antiquity. It was in this environment that the idea of a unified nation for the scattered and diverse people known as Slavs was born. Though there are several ways to define which people were Slavs and which were not, the groups in question were the Poles, the Ukrainians, the Czech, the Croatians, the Serbs, the Slovaks, the Bulgarians and the western Russians. The case for a pan-Slavic nation was ill-defined and hard to argue, because the Slavs as a group had little in common, and because the Slavs were widely scattered across Eastern Europe. The argument for a pan-Slavic nation centered around the formation of a powerful nation-state, with a theme of the Slavic people throwing off the ...read more.

A pan-Slavic nation would have to have either very highly irregular borders, or discontinuous pieces of territory, or would require mass migrations of Slavs into a single, governable territory. An even stronger statement is given by yet another member of the Slavic ethnicity, this time a Czech journalist by the name of Karel Havl�chek. He says the term Slav is purely geographical, and by no means are the Slavic people of one nationality. While pan-Slavism may have been a serious goal for many Slavs themselves, others had a different concern in regards to a pan-Slavic nation. Consider Austria and Russia, whose respective populations were then at least half Slavic. If one such state were formed, it would be widely scattered and ununited, and for a time, very economically, politically and militarily unstable. Suspicions of Russia wanting to seize control of lands around the Medeterranean were well-known; an editor of the Contemporary Austrian Review speaks of forstalling a 'Russian pan-Slavism' and the 'penetration of Russian influence among the western and southern Slavs'. For all of contemporary living memory, Russia had wanted to become a 'warm-water trading power', meaning having control of trade routes on ...read more.

An earlier Polish philosopher, Bronislaw Trentowski, gave a lecture in which he said that, if he were the Russian Czar, he would destroy the Ottoman and Austrian empires and thus liberate all the grateful Slavs. Being a Pole, probably the historically worst-treated Slavic nationality, he is eager to throw off the reins of imperial oppression, yet perhaps because of this he pointedly refuses to acknowledge the similarities between imperial domination of many ethnic groups by said governments and a pan-Slavic government. The pan-Slavic ideal must be interpreted as nothing more than a fanciful hope for an independent state. In reality, the concept of a pan-Slavic state is virtually the same as the concept of multi-national empires; it combines loosely related or unrelated ethnicities under the same government, which inevitably leads to incompatibility. The popularity of this movement can be ascribed to imperial ambitions of national leaders, who recognized that their best hope for becoming major European powers was through alliance with other small nations. Not only was such a state almost geographically impossible, it was also potentially harmful the culture and the independence of the national groups it hoped to unite, and certainly dangerous in terms of ethnic tensions and relations. ...read more.