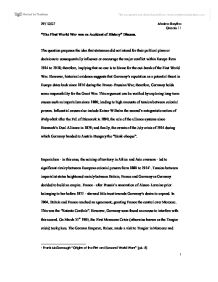 &quot;The First World War was an Accident of History&quot; Discuss

"The First World War was an Accident of History" Discuss. The question proposes the idea that statesmen did not intend for their political plans or decisions to consequentially influence or encourage the major conflict within Europe from 1914 to 1918; therefore, implying that no one is to blame for the out-break of the First World War. However, historical evidence suggests that Germany's reputation as a potential threat in Europe dates back since 1870 during the Franco-Prussian War; therefore, Germany holds some responsibility for the Great War. This argument can be verified by exploring long-term causes such as imperialism since 1880; leading to high amounts of tension between colonial powers. Influential causes also include Kaiser Wilhelm the second's antagonistic notion of Weltpolitik after the Fall of Bismarck in 1890, the role of the alliance systems since Bismarck's Dual Alliance in 1879; and finally, the events of the July crisis of 1914 during which Germany handed to Austria-Hungary the "blank-cheque". Imperialism - in this case, the seizing of territory in Africa and Asia overseas - led to significant rivalry between European colonial powers from 1880 to 19141. Tension between imperialist states heightened mainly between Britain, France and Germany as Germany decided to build an empire. ...read more.

Yet, after forming the Dual Alliance ensuring Austro-Hungarian support of Germany against Russia in case of attack, Bismarck went on to form the League of the Three Emperors in 1873 informally linking Germany, Austria-Hungary and Russia. However, this was not enough for Bismarck, who eventually put an end to the League in 1887 to create the secret Reinsurance Treaty between Germany and Russia. This was a guarantee that neither of the two countries would go to war with one another. In all evidence, Bismarck's intentions were based on a plan of security for Germany within Europe, possibly through fear of war. On the other hand Wilhelm's leadership worked against Germany's reputation. One year later, Wilhelm decided not to renew the Reinsurance Treaty when he came to power in 1888. This demonstrated unreasonable lack of diplomacy on Germany's behalf and encouraged Russia to turn towards France in 1893 in the Franco-Russian Alliance. This Alliance along with the Anglo-Russian Entente of 1907 and the Entente Cordiale formed the Triple Entente between the UK, France and Russia11. The immediate cause of the First World War was the assassination of Archduke Ferdinand, the heir to the throne of the Austro-Hungarian Empire, in Sarajevo on June 28th 1914. ...read more.

and become subordinate to German policy without further territory in Europe being taken from her."15 Grey warned that the British would declare war on Germany should she breach Belgian neutrality to in-danger France. In spite of this warning, German troops invaded Belgium that very day. This reckless behaviour was to lead Britain into war with Germany on the 4th of August, and submit Europe to three traumatising years of war. Fischer, a German historian, develops a thesis accusing Germany of being concious of her par-taking in Europe's decent into the First World War16; therefore associating with the idea of German responsibility. I agree with Fischer's thesis in the sense that Germany should hold a good deal of responsibility for the outbreak of the Great War. Germany's annexations of territory dating back since 1870, as well as her motivations for creating a Weltpolitik prove that Germany's desire to become a great power considerably outweighed her consideration of other countries. The same argument stands when considering Wilhelm's careless decisions during the 1914 July crisis - declaring war on two countries in the space of three days in spite of the pleas of peace from Russia and Britain. At this point, it is fair to assume that Wilhelm was aware of the weight of his actions. ...read more.