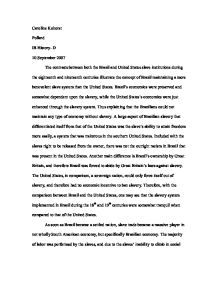 The history of Brazil.

Caroline Kohorst Pollard IB History- D 10 September 2007 The contrasts between both the Brazil and United States slave institutions during the eighteenth and nineteenth centuries illustrate the concept of Brazil maintaining a more benevolent slave system than the United States. Brazil's economics were preserved and somewhat dependent upon the slavery, while the United States's economics were just enhanced through the slavery system. Thus explaining that the Brazilians could not maintain any type of economy without slavery. A large aspect of Brazilian slavery that differentiated itself from that of the United States was the slave's ability to attain freedom more easily, a system that was traitorous in the southern United States. Included with the slaves right to be released from the owner, there was not the outright racism in Brazil that was present in the United States. Another main difference is Brazil's ownership by Great Britain, and therefore Brazil was forced to abide by Great Britain's laws against slavery. The United States, in comparison, a sovereign nation, could only force itself out of slavery, and therefore had no economic incentive to ban slavery. ...read more.

Due to the high number of freed slaves within this society, the Brazilians were able to encompass the concept of tolerance more so than the people of the United States. In contrast, the United States banned the freedom of slaves, therefore creating tension that encompassed intolerance, racism, and segregation (Skidmore). Once the United States claimed freedom of the slaves, the discrimination alone kept them from receiving the civil rights that their previous slave owners, or elite claimed. If a slave were to remain with his or her master, the relationship between the master and the slave could have been illustrated through the plantation system in Brazil, where the master would let the African share in his "free life and his Catholicism, allowed the natural development of the young African children," thus allowing the African slaves freedoms that slaves in the United States could not enjoy (Skidmore). Also, with the intermingling of natives, African, and Europeans in Brazil, such as interracial marriage and births, the amount of racism lessened. Although the Europeans regarded racism negatively, there was still judgment of the minorities through their economic and social status (Keen). ...read more.

Not to conclude that either one had a kind or effective system for slave trade, but instead it can be noticed that Brazil's system for slavery was more benign for multiple reasons. Within Brazil's economy, one could see the connection between the necessity for slavery and the treatment of the slaves. Due to the landowners need for workers at the time in order to keep the economy sustainable because of their lack of industrialization, their obligation to take somewhat superior care for their slaves occurred. Within the United States slave system, the need to take care of the slaves was appalling due to the increasing industrialization in the north and superfluous system for using slaves. Slaves in Brazil were allowed to be freed, setting a racial acceptance standard within the country, an ideal that the United States could not accept due to the refusal to free their slaves. The United States also, had to force itself into economic struggle in order to be free of the slavery system, creating contempt amongst the wealthy landowners. Within Brazil, the system was forced upon them by another country that assisted them with their economics and global trade. While scrutinizing the two systems, it can be concluded that for many reasons Brazil's slave trade was less harsh than that of the United States. ...read more.