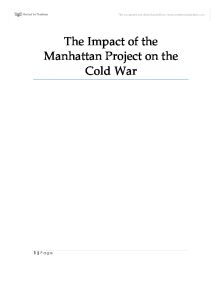 The Impact of the Manhattan Project on the Cold War

The Impact of the Manhattan Project on the Cold War Abstract Einstein wrote a letter to Roosevelt about the fact that Germany was trying to develop weapons themselves, and Hitler would use them on the United States. The project was led by Robert J. Oppenheimer, and other physicists from all over the world helped the cause. The Manhattan project was a prime component in the cause of the Cold War, as it caused Soviet uncertainty with respect to whether or not they could trust the Americans with security. This lead to the splitting of alliances that included both communist and non-communist powers, and lead to the political rivalry between the communist powers and countries with westernized democracies. The violation of agreements between Stalin and Britain, and the United States lead to the Soviet domination of Poland, Germany, and other countries. These countries were under Soviet communist control, even though they were interested in being democratic. This lead to the Truman Doctrine, which tried to (in the interest of the United States) discourage other countries from becoming communist. The Manhattan project also helped lead to the genesis of the arms race (as Inter-Continental Ballistic Missiles become a more real and ever-present danger), and space race between the United States and the Soviet Union. The Cold war was more about pride than anything else, and the Manhattan Project helped to start the obsession to have the latest, most detrimental weapons available. Introduction Of all of the events that transpired to lead to various actions that lead to the outbreaks of the Cold War, the Manhattan Project seems to be the most aggressive action taken by the United States to ensure national security against hostile countries. Therefore, I assert that the Manhattan Project was the main reason why not only the Cold War began, but that it also was an integral part in the genesis of the Arms Race, and Space Race. ...read more.

They split and became not the new transuranic elements that some thought Fermi had discovered, but radioactive barium isotopes and fragments of the uranium itself. The substances Fermi had created in his experiments, that is, did more than resemble lighter elements; they were the lighter elements. Importantly, the products of the Hahn-Strassmann experiment weighed less than that of the original uranium nucleus, and herein lay the primary significance of their findings. It followed from Einstein's equation that the loss of mass resulting from the splitting process must have been converted into energy in the form of kinetic energy that could in turn be converted into heat. Calculations made by Hahn's former colleague, Lise Meitner, a refugee from Nazism then staying in Sweden, and her nephew, Otto Frisch, led to the conclusion that so much energy had been released that a previously undiscovered kind of process was at work. Frisch, borrowing the term for cell division in biology-binary fission-named the process fission.8 For his part, Fermi had produced fission in 1934, but had not recognized it. It soon became clear that the process of fission discovered by Hahn and Strassmann had another important characteristic besides the immediate release of enormous amounts of energy. This was the emission of neutrons. The energy released when fission occurred in uranium caused several neutrons to "boil off" the two main fragments as they flew apart. Given the right set of circumstances, perhaps these secondary neutrons might collide with other atoms and release more neutrons, in turn smashing into other atoms and, at the same time, continuously emitting energy. Beginning with a single uranium nucleus, fission could not only produce substantial amounts of energy but could also lead to a reaction creating ever-increasing amounts of energy. The possibility of such a "chain reaction" completely altered the prospects for releasing the energy stored in the nucleus. A controlled self-sustaining reaction could make it possible to generate a large amount of energy for heat and power, while an unchecked reaction could create an explosion of huge force. ...read more.

The American Legion and other veteran's organizations successfully lobbied against the inclusion of quotes from a number of notables including Dwight D. Eisenhower that questioned the necessity of the bomb's use. The nuclear weapons designed, built, and tested by the Manhattan Project and its lineal descendents were perhaps the single most defining element of the second half of the twentieth century. At the same time that they visited on the world unprecedented fear and a daily awareness of the nearness of global holocaust, nuclear weapons also bought the necessary time to achieve a successful outcome to the Cold War on the basis of ideology, economics, social structure, and the limited application of military might. In the over half-century since the Manhattan Project, the world has seen no wars that have even come close to matching the death and destruction associated with the two world wars of the early part of the century. Perhaps Robert Oppenheimer's wish for a weapon that was so terrible that war itself would become obsolete was not entirely without hope. Without the advent of the atomic bomb, which came about as the result of the Manhattan Project, there would be no bad blood between the communist and the democratic societies in the mid twentieth century. The Manhattan Project not only helped to start the Cold War, but also the space race, and was the fodder to the anti-communist fire which the United States helped to promote with the Truman Doctrine 1947. Though the threat to both American and Soviet nation security was what started the Cold War, it was the need for technological and intellectual pride which drove the countries into a frenzy to create the deadliest weapons the fastest. The Manhattan Project helped to start this newfound need for technical and intellectual pride. Bibliography Gordin, Michael D. Five Days in August: How World War II Became a Nuclear War. Princeton, NJ: Princeton University Press, 1945. Oppenheimer, J. Robert. Atom and Void. Princeton, NJ: Princeton University Press, 1950. PageWise. PageWise. 1 April 1999. 5 January 2010 <http://www.essortment.com/all/effectswhatcau_mmy.htm>. ...read more.