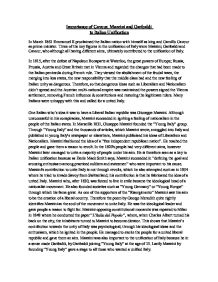 The Importance of Cavour, Mazzini and Garibaldi to Italian Unification

Importance of Cavour, Mazzini and Garibaldi to Italian Unification In March 1861 Emmanuel II proclaimed the Italian nation with himself as king and Camillo Cavour as prime minister. Three of the key figures in the unification of Italy were Mazzini, Garibaldi and Cavour, who although all having different aims, ultimately contributed to the unification of Italy. In 1815, after the defeat of Napoleon Bonaparte at Waterloo, the great powers of Europe; Russia, Prussia, Austria and Great Britain met in Vienna and regarded the changes that had been made to the Italian peninsula during French rule. They viewed the abolishment of the feudal taxes, the merging into less states, the new responsibility that the middle class had and the new feeling of Italian unity as dangerous. Therefore, so that dangerous ideas such as Liberalism and Nationalism didn't spread and the Austrian multi-national empire was maintained the powers signed the Vienna settlement, removing French influence & constitutions and restoring the legitimate rulers. Many Italians were unhappy with this and called for a united Italy. One Italian who's idea it was to have a Liberal Italian republic was Giuseppe Mazzini. ...read more.

This shows that Mazzini's contribution towards the unity of Italy was psychological, through his ideological ideas and the enthusiasm, which he ignited in the people. He managed to excite the people for a united liberal republic and gave them an aim. Mazzini was also important to the unification of Italy because he in a sense made Garibaldi, by Garibaldi joining "Young Italy" at the age of 15. Lastly Mazzini by founding "Young Italy" gave a stage to all those who wanted a unified Italy. Garibaldi who after the age of 15 joined "Young Italy" had a crewed idea of politics but saw it desirable to have a unified Italy. He preferred a Republic but would have accepted a monarch as well. Garibaldi was a radical and used force to fulfill his aims, which is one of the reasons why he played such a crucial role in Italian unification. Without Garibaldi's military action the southern states could barely have been brought together into a unified Italy. Garibaldi became a successful Guerrilla warrior during his time in exile, in South America. ...read more.

By doing this he contributed towards unifying Italy because he decreased the number of independent states. Cavour secretly planned a war with Austria by persuading Napoleon III to a pact against Austria. By 1859 Cavour had caused a major crisis, which led to an ultimatum by Austria demanding Piedmontese disarmament. Subsequently objecting Cavour made the French declare war on Austria, who therefore lost Lombardy, which Napoleon III transferred to Victor Emmanuel II in 1859. Cavours cunning political and diplomatic maneuvers, Piedmontese territory grew annexing Northern states. Cavour is seen as the brain of Italian unification as arranged the circumstances for the unification. However his possibly greatest contribution was that he sent King Victor Emmanuel II to intercept Garibaldi in the Papal States. Cavour fearing that Garibaldi could attack the French troops stationed in Rome and therefore cause French troops to invade Piedmont sent King Victor Emmanuel II to meet Garibaldi. Garibaldi unexpectedly handed over the states he had conquered. Due to his cunning political contrivances Cavour was extremely important for the unification of Italy. The three architects of unified Italy; Mazzini, Garibaldi and Cavour all contributed in very different ways and all had different notions of what should become of the Italian states. However each of them contributed equally and were equally important for the unification of Italy. ...read more.