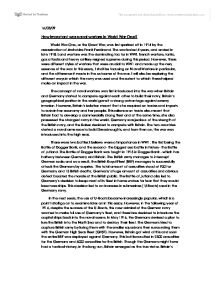 The Importance of Naval Warfare in World War One

How important was naval warfare in World War One? World War One, or the Great War, was first sparked off in 1914 by the assassination of Archduke Frank Ferdinand. The war lasted 4 years, and ended in late 1918. Land warfare was the dominating factor in WWI. Trench warfare, tanks, gas attacks and heavy artillery reigned supreme during this period. However, there were different styles of warfare that were crucial to WW1 and made up the very essence of the war. In this essay, I shall be focusing on Naval Warfare in particular, and the difference it made in the outcome of the war. I will also be exploring the different ways in which the navy was used and the extent to which these helped make an impact in the war. The concept of naval warfare was first introduced into the war when Britain and Germany started to compete against each other to build their navy. Britain's geographical position in the world gave it a strong advantage against enemy invasion. However, Britain's isolation meant that she required on trades and imports to sustain her economy and her people. ...read more.

The Germans tried to capture British army by luring them with the smaller squadrons then surrounding them with the German High Seas Fleet (GHSF). However, Britain got wind of this and soon the entire BRF was deployed against Germany. This battle resulted in 2500 casualties for the Germans and 6000 casualties for the British. Though the Germans might have had a tactical victory, in the long-run, Britain emerged as the true victor. Britain's strategic victory left her with sole control of the North Sea. This victory helped shaped much of the outcome of the war, owing to the fact that, if Britain had lost, they would've faced a major threat of isolation and invasion from Germany, and might've had all trade supplies cut off. U-Boats formed a crucial part of Germany's naval army. The main weapon of the U-Boat was its torpedo. The torpedo could be launched while the submarine was submerged, and therefore gave it a huge advantage over its enemies. However, this unfair advantage made other neutral countries repellent towards the idea of U-Boats, and was intensified when Berlin declared an "Unrestricted submarine" policy, which stated that within the war zone the Germans had declared around the British Isles, the U-Boats would be authorized to attack merchant ships. ...read more.

From May- Dec 1917, German submarines sank a total of 500 British merchant ships, worth 2400000 tons altogether. As a result of this, the British decided to introduce the convoy system. In 1917- 1918, the first convoy system was introduced. The convoy system was a method in which merchant ships traveled in formation. They were escorted by warships, destroyers, trawlers- which would detect submarines, destroyers and other ships. Using the convoy system, the supply imports were under a higher guarantee and protection. It was important that the exports got across as the British were highly reliant on imported food. In June 1917, 16539 ships were escorted in convoy, of which only 154 were torpedoed. In conclusion, naval warfare influenced much of the outcome of the war. From Jutland, to the U-Boats, to the Blockade- all of these events were key contributing factors that greatly influenced WW1. Without these incidents, the Blockade in particular, the war might've still dragged on, until both sides came to a stalemate, and the people would've just had their suffering prolonged. Therefore, in my opinion, naval warfare was an important and integral part of WW1, and ultimately, had a hand in shaping the Great War we now know today. ?? ?? ?? ?? 16/03/09 ...read more.