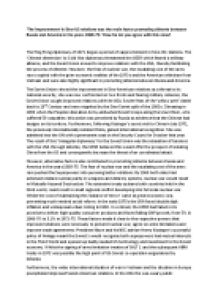 The improvement in Sino-US relations was the main factor promoting dtente between Russia and America in the years 1969-75. How far do you agree with this view?

ï»¿‘The improvement in Sino-US relations was the main factor promoting détente between Russia and America in the years 1969-75.’ How far do you agree with this view? The Ping Pong diplomacy of 1971 begun a period of rapprochement in Sino-US relations. The ‘Chinese dimension’ to Cold War diplomacy threatened the USSR which feared a military alliance, and the Soviet Union moved to improve relations with the USA, thereby facilitating the process of détente. However, the fear of nuclear war, the escalating cost of the arms race coupled with the grim economic realities of the 1970s and the American withdraw from Vietnam and were also highly significant in promoting détente between Russia and America. The Soviet Union viewed the improvement in Sino-American relations as a threat to its national security, she was now confronted on two fronts and fearing military collusion, the Soviet Union sought improved relations with the USA. ...read more.

By 1969 both sides had achieved relative nuclear parity in weapons and delivery systems, nuclear war would result in Mutually Assured Destruction. The extensive treaty systems both countries held in the third world, could result in small regional conflict developing into full scale nuclear war. Whilst the cost of maintaining this ?balance of terror? came at great economic cost, preventing much needed social reform. In the early 1970s the USA faced double digit inflation and widespread urban rioting in 1968. In contrast, the USSR had failed in its promise to deliver high-quality consumer products and faced falling GNP growth, from 5% in 1966-70 to 3.1% in 1971-75. These factors made it clear to the respective powers that improved relations were necessary to prevent nuclear war, agree on arms limitations and improve trade agreements: President Nixon and his NSC adviser Henry Kissinger?s successful policy of linkage meant the Soviet?s would recognise both superpowers had mutual interests in the Third World and opened up badly needed US technology and investment to the Soviet economy. ...read more.

The Helsinki Agreement of 1975 continued the policy of East-West dialogue over Europe begun by Willy Brandt’s successful policy of Ostpolitik during the late 1960s. The Soviet controlled Warsaw Pact gained official US recognition of the post-ww2 European borders, whilst the US largely unsuccessfully sought concessions over human rights issues from the USSR, which following the agreement were widely ignored. In conclusion, détente was the result of a variety of complex factors, driven by a war-weary United States counting the human and economic cost of militaristic confrontation of Communism in Vietnam. The United States under President Nixon recognised more could be achieved through peaceful diplomacy, whilst both Superpowers recognised that détente offered the opportunity to curtail spiralling defence spending and open up trade links between the nations. The improvement in Sino-US relations added an important Chinese dimension to Cold War diplomacy, but was not the main factor promoting détente between Russia and America in the years 1969-1975. ...read more.