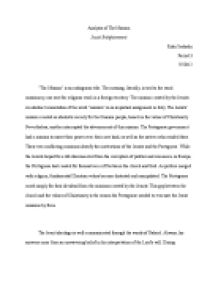 The Jesuit Mission and Portugal.

﻿Analysis of The Mission Jesuit Enlightenment Rishi Seshadri Period 3 9/20/12 "The Mission" is an ambiguous title. The meaning, literally, is tied to the word missionary, one sent for religious work in a foreign territory. The mission created by the Jesuits An abstract connotation of the word "mission" is an important assignment or duty. The Jesuits' mission created an idealistic society for the Guarani people, based on the values of Christianity. Nevertheless, another interrupted the advancement of this mission. The Portuguese government had a mission to assert their power over their new land, as well as the natives who resided there. These two conflicting missions identify the motivations of the Jesuits and the Portuguese. While the Jesuits hoped for a life disconnected from the corruption of politics and commerce in Europe, the Portuguese had created for themselves a rift between the church and God. ...read more.

However, Gabriel also was opposed to the corruption of politics and church in European government. During the discussion of the Treaty of Madrid, Gabriel said to the Cardinal "We are not the members of democracy, Father. We are the members of an order." As he stood up to the religious head, Gabriel was acknowledging the difference between the principle of his mission and that of Portugal. After this passive aggressive remark of the ideas being taught at the mission, the Portuguese, who now owned the land, had no choice but to destroy this civilization. The natives felt only an allegiance to God, and none other. Politics in Europe was largely based upon principles of the Old World Order. The Portuguese still maintained much of their power through the nobility. Much of the nobility also maintained power in the church. They used their powers in politics to drive their actions for personal benefit. ...read more.

During the end of this Old World Order, even the religious harmony of a whole people could not overcome the lust for power of Portugal. Regardless, the Jesuit mission was a milestone of western enlightenment. A tribal group of uncivilized hunters and gatherers achieved a literacy rate of 100%. Nevertheless, this was not important to the Portuguese or even the Cardinal. Within the church, and therefore in politics, religion was not a set of fundamental values for persons to live by. Instead, religion was totalitarian and the church was another house for the monarch. Knowing the inevitability of death, Mendoza and Gabriel refused to leave, becoming martyrs for true freedom of religion. This moving decision is best summarized in the words of Altimirano, "So, your Holiness, now your priests are dead, and I am left alive. But in truth, it is I who am dead, and they who live. For as always, your Holiness, the spirit of the dead will survive in the memory of the living." ...read more.