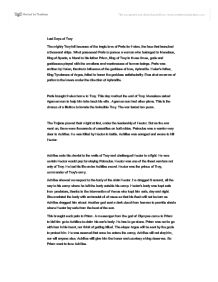 The last day of troy

Last Days of Troy The mighty Troy fell because of the tragic love of Paris for Helen, the face that launched a thousand ships. What possessed Paris to pursue a woman who belonged to Menelaus, King of Sparta, a friend to his father Priam, King of Troy.In those times, gods and goddesses played with the emotions and weaknesses of human beings. Paris was smitten by Helen, thanks to influence of the goddess of love, Aphrodite. Helen's father, King Tyndareus of Argos, failed to honor the goddess satisfactorily. Eros shot an arrow of potion to the lovers under the direction of Aphrodite. Paris brought Helen home to Troy. This day marked the end of Troy. Menelaus asked Agamemnon to help him take back his wife . Agamemnon had other plans. This is the chance of a lifetime to invade the invincible Troy. The war lasted ten years . The Trojans proved their might at first, under the leadership of Hector. ...read more.

Achilles willl give him the honor and courtesy a king deserves. So Priam went to face Achilles. Indeed, Achilles held Priam with deep respect as a good ruler, and for his courage to come and fetch the body of his son deep in the enemy's territory. Priam asked for twelve days of mourning, nine days to mourn, burial on the tenth day, public feast on the eleventh day in Hector's honor, and if needs be, fight on the twelfth day. Achilles assured him his request will be honored. The Trojans were beginning to wear down under years of war. They lived in constant fear. With Hector gone, their fear was magnified. The mourning period for Hector marked the last days of Troy. Perhaps, it was also mourning the end of a city and its people. The WOODEN HORSE The walls of Troy were impervious. As the invaders spent time in idleness during the period of mourning, Odysseus ordered a large wooden horse to be built. ...read more.

Many Trojans were killed, the city was plundered and burnt mercilessly. Women, including members of the royal house and priestesses were raped, and later brought back to Greece as slaves. Cassandra, daughter of Priam was raped in front of the statue of Athena. Many children of the royalty were slain, including the son of Hector. King Priam was killed, huddled in front of the altar of Zeus. His wife was taken as a slave for the house of Agamemnon. Achilles fulfilled the prophecy that his name will live on, should he choose to go to war. He will be remembered for his skills as a warrior, known for being fearless. Didn't Achilles' heel get famous as well? It was a point of weakness, it was where his mother, Thetis held him as she immersed him in the waters of the river Styx. Paris was not the warrior Hector was, but he was a sharp archer. It was his arrow that felled Achilles. Such is the fall of Troy. ...read more.