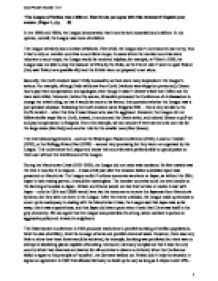 The League of Nations was a failure. How far do you agree with this statement? Explain your answer.

'The League of Nations was a failure'. How far do you agree with this statement? Explain your answer. [Paper 1, (c), /8] In the 1920s and 1930s, the League demonstrated that it can be both successful and a failure. In my opinion, overall, the League was more of a failure. The League certainly has a number of failures. First of all, the League didn't command its own army, thus it had to rely on member countries to contribute troops. In cases where the member countries were reluctant to send troops, the League would be rendered helpless; for example, at Vilna in 1920, the League was not able to stop the takeover of Vilna by the Poles, as the French didn't want to upset Poland (they saw Poland as a possible ally) and the British were not prepared to act alone. Secondly, the Corfu incident wasn't fully successful, as there were many loopholes in the League's actions. For example, although Italy withdrew from Corfu (violence was altogether prevented), Greece had to pay them compensation and apologise, even though it wasn't Greece's fault that Tellini and his team were killed. ...read more.

After the events unfolded, the League made up excuses to cover up its inadequacy in dealing with the Manchurian Crisis; the League said that Japan was so far away, that it was a special case, and that Japan did have a point when it said that China was itself in the grip of anarchy. We can agree that the League was powerless if a strong nation decided to pursue an aggressive policy and invade its neighbours. The Disarmament Conference in 1932 produced resolutions to prohibit bombing of civilian populations, limit the size of artillery, limit the tonnage of tanks and prohibit chemical waste. However, there was very little to show how these limits would be achieved, for example, bombing was prohibited but there was no attempt at abolishing planes capable of bombing. Moreover, Germany complained that it was the only country which had disarmed and wanted for all countries to disarm to its level; when the Conference failed to agree to the principle of 'equality', the Germans walked out. ...read more.

On the other hand, the League was quite successful in some of its operations. The League allowed for member countries to voice their opinions in the Assembly. At the Aaland Islands in 1921, Sweden and Finland wanted control of the Aaland Islands - they appealed for the League's help and accepted the League's ruling, so war was avoided. Another example can be Upper Silesia in 1921, when both Germany and Poland wanted control of the industrial region. In 1920, a plebiscite was organised for the Silesians to vote on which country they wished to join, and French and British troops were sent to keep order at the polling booths. The League used the results from the poll to divide the region, but built in many safeguards to prevent future disputes - violence was avoided. Bulgaria (1925) was successful to an extent, as violence was avoided and the aggressive country did leave from the country they invaded. The League had a number of commissions and committees that were set up to improve people's living and working conditions around the world. ?? ?? ?? ?? Mai Pham Thanh 11D 1 ...read more.