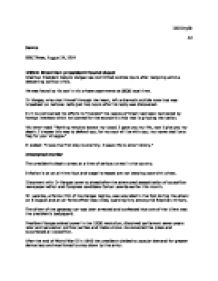 The Life and Policies of Brazilian President Getulio Vargas - analysis of sources.

Udi Onyile A3 Source BBC News, August 24, 1954 1954: Brazilian president found dead Brazilian President Getulio Vargas has committed suicide hours after resigning amid a deepening political crisis. He was found by his son in his private apartments at 0830 local time. Dr Vargas, who shot himself through the heart, left a dramatic suicide note that was broadcast on national radio just two hours after his body was discovered. In it he complained his efforts to "liberate" the people of Brazil had been hampered by foreign interests which he blamed for the economic crisis that is gripping the nation. His letter read: "Nothing remains except my blood. I gave you my life, now I give you my death. I choose this way to defend you, for my soul will be with you, my name shall be a flag for your struggle." It ended: "I take the first step to eternity. I leave life to enter history." Attempted murder The president's death comes at a time of serious unrest in the country. Inflation is at an all-time high and wage increases are not keeping pace with prices. Discontent with Dr Vargas came to ahead after the attempted assassination of opposition newspaper editor and Congress candidate Carlos Lacerda earlier this month. ...read more.

Also Industrial leaders were given more influence nationally. When Vargas established a new constitution in 1934, Vargas electorally reformed the voting system by having secret ballots, giving women right to vote, and making special courts to supervise elections. By establishing "Estado Novo", Vargas embraced and established a populist authoritarian country. Even with the economic growth of the country, citizens of this time were very repressed. Citizens who tried to have organized strikes were considered to be practicing a crime. Journalist and novelist were also censored, jailed, and discouraged. Military school was restricted to citizens who were considered respectable within the retrospect of the social hierarchy. Even with this repression Vargas was the first official to allow women to vote, and even gave women positions to serve on his staff. Also, with the new constitution there were major reforms in the educational system. Economic Perspective During the end of Vargas's term he held and coup and started a new economic system called "Estado novo" which was a corporatist state. With the New state many economic changes were made in the Brazilian system. For workers there were now a wide range of benefits, including minimum wage. Also, Social Security laws were enacted, but the private enterprise remained the same. ...read more.

I have been fighting without weapons. The hatred, the lies, the fake deeds, nothing took me down. I do fear nothing. Firmly and softly I step forward the eternity, leaving life to go into History. Get�lio Vargas, Rio de Janeiro, Aug/24th/1954 Origin: August 24, 1954 in Rio de Janeiro Brazil Purpose: Vargas wrote the letter before killing himself after being asked by the military to resign. This was his last words to the people. Value: The letter is a primary source that shows the inner workings of the leader, Vargas. Limitations: Since Vargas is being asked to resign from his position, his perspective of the military and Brazilian government would be screwed, and not very reliable. Also, his opinion on his policies would not be very good sources, because they are policies which he created and enacted. "The Autumn of the Patriarch" Vargas's administration dissolved in frustration and charges of corruption. The military demanded that Vargas resign from his position, instead of resigning Vargas shot himself on August 1954 to death. It was not until after his death that his social programs he started during his presidency were celebrated. Vargas had sympathy from the people for his death, and is remembered as the "father of the poor". With his death Vargas left behind a letter, the letter was read aloud on radio and television which rallied the citizens up and left them chanting for his return instead of his resignation. ?? ?? ?? ?? ...read more.