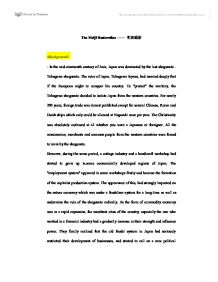 The Meiji Restoration -- ???? #Background# - In the mid-nineteenth century of Asia, Japan was dominated by the last shogunate - Tokugawa shogunate. The ruler of Japan, Tokugawa Ieyasu, had worried deeply that if the European might to conquer his country. To "protect" the territory, the Tokugawa shogunate decided to isolate Japan from the western countries. For nearly 200 years, foreign trade was almost prohibited except for several Chinese, Korea and Dutch ships which only could be allowed at Nagasaki once per year. The Christianity was absolutely outlawed at all whether you were a Japanese or foreigner. All the missionaries, merchants and common people from the western countries were forced to leave by the shogunate. However, during the same period, a cottage industry and a handicraft workshop had started to grow up in.some economically developed regions of Japan. The "employment system" appeared in some workshops firstly and became the formation of the capitalist production system. The appearance of this, had strongly impacted on the nature economy which was under a feudalism system for a long time as well as undermine the rule of the shogunate radically. As the form of commodity economy was in a rapid expansion, the merchant class of the country, especially the one who worked in a financial industry had a gradually increase in their strength and influence power. ...read more.

Others / Abolished these checkpoints which were set up by Daimyos; cancelled the guild system and the monopoly organization in business community. Purpose To compete with the western countries, to promote the industry and through the development of capitalism as a way to promote national modernization. * Military: Policy Date Content Nationwide conscription 1872 Mandated that all male over the age of 20 would serve in the army. 3-year general service, and reserve service for 2 years. In army / Reformed the establishment of the army units, which was refered to the German training for the Army, the Navy training to the United Kingdom's. ??? 1876 Prohibited people, with the exception of the military and law enforcement officials, from carrying weapons in public. Others / Carried out militarism and the spirit of Bushido. Purpose To increase the military strength which is the foundation underlying all our efforts to build the country. * Education: Policy Date Content ???????? 1890 A guide on students' behaviours, they were required to sticked to the following principles: 1. Furthermore advance public good and promote common interests. 2. Always respect the Constitution and observe the laws. 3. Should emergency arise, offer yourselves courageously to the State. 4. Guard and maintain the prosperity of Our Imperial Throne coeval with heaven and earth. Compulsory education / Carried out compulsory education. ...read more.

By defeating these two former powerful coutries - the Qing Empire and Tsarist Russia, it showed itself as a growing world power to the westerns. The victory against Russia was the especially shocking to them as it was the first time that an Asian nation had defeated a European power in war. On the other hand, although the Meiji government brought Japan a huge development, it was still a fact that because they were always focus on how the nation can become stronger in the shortest time, there were a number of problems left as a result. Like too much power for the Emperor; the one who was born in a family with fief always hold political powers; land annexation was still serious and so on problems which were difficult to solve. The influence of these problems was also one of the reasons that made Japan expanse their territories later. In all, the Meiji Restoration is was great event which led Japan to the world firstly and turned it to be a much more stronger country than before. Because as there are so many complex factors during the restoration, we can not judge if it was positive or negative to the whole world. But there is no debut that the Meiji Restoration is not only a political change of system, but also a real cultural revolution. Reference: ???? - http://baike.baidu.com/view/22062.htm#4 Japan Rerference - http://www.jref.com/glossary/meiji_restoration.shtml applet-magic.com - http://www.sjsu.edu/faculty/watkins/meiji.htm Encyclopedia - http://www.encyclopedia.com/topic/Meiji_restoration.aspx The Meiji Restoration - http://cla.calpoly.edu/~mriedlsp/history315/MeijiText.html Name: Nancy Tang From: Class 2 grade 10 Student Number: 2010205 ...read more.