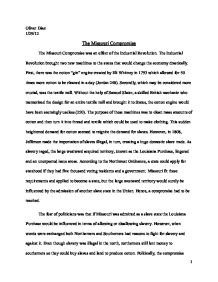 The Missouri Compromise. The fear of politicians was that if Missouri was admitted as a slave state the Louisiana Purchase would be influenced in terms of allowing or disallowing slavery.

Oliver Diaz 1/29/12 The Missouri Compromise The Missouri Compromise was an effect of the Industrial Revolution. The Industrial Revolution brought two new machines to the states that would change the economy drastically. First, there was the cotton "gin" engine created by Eli Whitney in 1793 which allowed for 50 times more cotton to be cleaned in a day (Jordan 248). Secondly, which may be considered more crucial, was the textile mill. Without the help of Samuel Slater, a skilled British mechanic who memorized the design for an entire textile mill and brought it to States, the cotton engine would have been seemingly useless (250). The purpose of these machines was to clean mass amounts of cotton and then turn it into thread and textile which could be used to make clothing. This sudden heightened demand for cotton seemed to reignite the demand for slaves. ...read more.

When thinking of its motives, it is seen that this compromise reflects both national and sectional interests. It reflects the national interest of keeping an equal number of slave and non-slave states in the Union. This becomes crucial in voting because an odd number can lead to unfairness in the political outcomes and decisions agreed upon. On the other hand, the sectional interests reflected are those of fulfilling the wishes of the states and observing their views and opinions regarding slavery. This "balance" that was achieved was actually exactly what Washington had hoped to avoid. The idea of sectionalism was even more firmly established by realizing that there had to be an equal number of slave and non-slave states to maintain political balance. Instead of "placing the interests of one region ahead of the welfare of the nation as a whole" each region made sure they could continue to profit and the regions looked out for themselves (221). ...read more.

The problems however did not let up for the States and fluctuations continued. The booms were all built on the ideas of speculation. Banks assumed that western land would be bought at a steady pace and so they printed bank notes without a second thought. The rise in prices brought a rise in production as well but again, this constant rise was based on speculation and the economy would fall thereafter. The inconsistency of the economy was only the first problem. The market economy also worked cyclically and would not allow any faltering industry to succeed. By stepping into the new market economy the US made it extremely difficult for their economy to consistently prosper. In response to the lack of prosperity, the government took some charge by promoting the economy and encouraging "business enterprise and risk taking" (Norton 247 B). The government seemed to save the economic plunder by promoting corporations and the individual, which led to a more stably efficient economy. Word Count: 802 ?? ?? ?? ?? 1 ...read more.