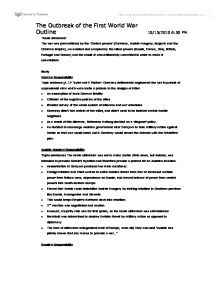 The outbreak of the First World War

Thesis statement: The war was premeditated by the 'Central powers' (Germany, Austria-Hungary, Bulgaria and the Ottoman Empire), un-avoided and accepted by the allied powers (Russia, France, Italy, Britain, Portugal and Greece) and the result of acts deliberately committed in order to make it unavoidable. Body German Responsibility Topic sentence: A.J.P Taylor and F.Fischer: Germany deliberately engineered the war in pursuit of expansionist aims which were really a prelude to the designs of Hitler. * An assumption of basic German liability * Criticism of the negative policies of the Allies * Broader survey of the whole system of alliances and war schedules. * Germany didn't feel certain of her allies, and didn't want to be isolated amidst hostile neighbors. * As a result of this dilemma, Bethmann Hollweg decided on a 'diagonal' policy. * He decided to encourage Austrian government after Sarajevo to take military action against Serbia so that war would break out & Germany would smash the Entente with the Schlieffen plan. ...read more.

* The tone of ultimatum antagonized most of Europe, even Ally Italy who said "Austria has plainly shown that she means to provoke a war..." Russia's Responsibility Topic sentence: Germany may, in collusion with Austria-Hungary, have precipitated the war, but the Allied powers did little to avoid it. * Russia and France were willing to accept the challenge. * Russia had Austrophobia since the Bosnian crisis of 1908 * Tsar identified Russian diplomacy with expansionism. * According to memorandum by Sazanov, a conference held by the Tsar on 8th February produced a consensus that a general European war was likely because of collapse of Turkey and Austro-Serb conflict. * Mobilization plans were prepared to give confidence to Russian General Staff. * There was constant pressure from the General staff to blind civilian leadership to Russia's military weaknesses. * As a result, Russia was the 1st of the major powers to undergo general mobilization. ...read more.

* This was because as an imperial power, Britain didn't want to be involved in a continental struggle. * By 4th August, Liberal gov. made a direct commitment to intervene. Conclusion * Europe showing a willingness to rush into war was for three main reasons: * For years the powers had resentments and grievances, being accustomed to pushing claims in order to avoid diplomatic humiliation, which led them to pursue dangerous policies and a willingness to accept the risk of war. * The alliances can't be sufficient explanations for outbreak of war because they were defensive (i.e 1879 Dual Alliance), and the way the war broke out had little relation to treaty obligations (e.g. Russia had no contractual obligation to assist Serbia). * However, alliances did affect international relations (colonization) and contribute to the growth of tension in Europe in the decade before 1914. * Alliances had direct bearing on the arms race and development of military schedules. The Outbreak of the First World War Outline 10/13/10 6:30 PM 10/13/10 6:30 PM 10/13/10 6:30 PM ...read more.