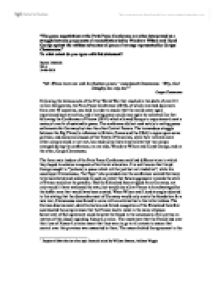 The peace negotiations at the Paris Peace Conference are often interpreted as a struggle between proponents of reconciliation led by Woodrow Wilson and Llyod George against the ruthless advocates of peace of revenge represented by Gorges Clemenceau.

"The peace negotiations at the Paris Peace Conference are often interpreted as a struggle between proponents of reconciliation led by Woodrow Wilson and Llyod George against the ruthless advocates of peace of revenge represented by Gorges Clemenceau." To what extent do you agree with this statement? Bryson Ddaddah IB1A 10-06-2010 "Mr. Wilson bores me with his fourteen points," complained Clemenceau. "Why, God Almighty has only ten!"1 Gorges Clemenceau Following the heinous acts of the First World War that resulted in the death of over 8.5 million belligerents, the Paris Peace Conference (1919), of which involved diplomats from over 30 countries, was held in order to ensure that the world never again experienced such atrocities, and a lasting peace could once again be achieved like that following the Conference of Vienna (1814) which allowed Europe to experience almost a century's worth of sustainable peace. The conference did not seek solely to setting peace settlements for Germany but also the other Central Powers. The tremendous struggle between the Big Three (in reference to Britain, France and the USA) to agree upon some political, and economic clauses of the Treaty of Versailles, while their interests were either compromised or not met, has made some historians believe that two camps emerged during the conference; on one side, Woodrow Wilson and Lloyd George, and on the other, Gorge Clemenceau. ...read more.

France, being the region where the most fighting during the First World War occurred, had consequently suffered major physical damage and had lost over 1.3 million soldiers making not only their total casualties reaching nearly 3.2 million3, but also leaving in requirement of the most reconstruction of all the warring states. Clemenceau's hope that the German payments would cover the costs of reparations once again became a cause for disagreement. Though Wilson agreed that Germany should take responsibility, disagreements on which aspects the repayments should cover resulted in the postponement of the Reparations Commission to a later date (by May 1921 the Commission was expected to come up with a final concession). The Saar dispute, though it may seem to have simply been yet another territorial feud, was also another way for France to ensure that its wish for German economic decline was affirmed. Annexation of the Saar to the French would have resulted in her further empowerment as well as provided a basis for deeper resentment from Germany. Clemenceau therefore had no choice but to compromise on British and American decision that they should only attain control over Saar's coal mines and allow the League of Nations to mandate it for 15 years. ...read more.

Finally, Clemenceau was under pressure to restore France to its former glory and to insure that no future aggression from Germany would take place. By putting all these considerations in mind, one understands how easy it is to concede that "The peace negotiations at the Paris Peace Conference are often interpreted as a struggle between proponents of reconciliation led by Woodrow Wilson and Lloyd George against the ruthless advocates of peace of revenge represented by Gorges Clemenceau." The extent of the struggle and the frustrations that the leaders had can be accentuated by Clemenceau's statement that Wilson bores him with his 14 Points. Though this statement is to a great extent true, it is however not entirely true due to the fact that there were some factors on which the Big Three agreed on without much dispute such as the restoration of Alsace-Lorraine to France, the 'war guilt' clause, and the fact that none of the defeated states could have representatives in the peace settlements. In addition, the other disputes came to an accord though in some cases compromises had to be made. 1 Empire of debt: the rise of an epic financial crisis By William Bonner, Addison Wiggin 2 Norman Lowe 3 Britannica Ency. Page 987 vol. 29 4 Modern World History; Norman Lowe ?? ?? ?? ?? ...read more.