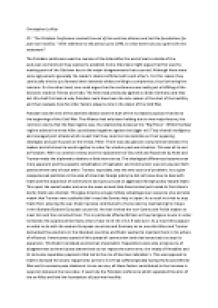 The Potsdam Conference marked the end of the wartime alliance and laid the foundations for post-war hostility. With reference to the period up to 1946, to what extent do you agree with this statement?

﻿Christopher Le May 25. ??The Potsdam Conference marked the end of the wartime alliance and laid the foundations for post-war hostility.?? With reference to the period up to 1946, to what extent do you agree with this statement? The Potsdam conference was the reunion of the Allies after the end of war to decide of the post-war environment they wanted to establish. Some historians might argue that this was the starting point of the Cold war due to the major disagreements that occurred. Although there were some agreements generally the leader?s ideals conflicted with each other?s. For this reason they continually tried to put forward their demands without willing to compromise, thus furthering the tensions. On the other hand, one could argue that the conference was really just a fulfilling of the decisions made at Tehran and Yalta. The Allies had previously agreed to divide Germany and they did. We shall first look at why Potsdam could have been the sole reason of the start of the hostility and then evaluate how far other factors played a role in the debut of the Cold War. ...read more.

As a result he tried to stop Stalin from entering the war. Stalin had also contributed to the tension by maintaining his troops in the liberated Eastern European countries. He even invited the non-Communist Polish leaders to meet him and then arrested them. This in particular affected Britain as they had gone to war in order to liberate the oppressed Germany only to have to let the U.S.S.R take over. As a result they argued on what to do with the eastern European countries and Germany as on one side Atlee and Truman demanded free elections in the liberated countries and Stalin wanted to maintain them in his sphere of influence. America was scared of this spread of communism and tried every tactic to stop its expansion. This Stalin translated as American imperialism. Reparations were also a big source of disagreement as America was determined to not repeat the same error, the treaty of Versailles and its immense reparation payments that led to the rise of German radicalism?s. ...read more.

This caused massive tension as Stalin translated it as a form of American bribery in order to spread its imperialism. But this Foreign policy was only the result of Kennan?s Long Telegram which stated that Russia wanted to expand and states that the American government might be in danger. This shaped an aggressive foreign policy for years to come. In addition Stalin did not help to calm the Americans through the Berlin Blockade. Stalin blockaded all entry of supplies to East Berlin by road. As a result the Allies had to fly all the supplies in by plane. This was seen a ?proof? by Truman that the U.S.S.R wished to expand and NATO was set up in defence. This increased suspicion and when West Germany joined NATO the U.S.S.R created the Warsaw pact which further created two distinct sides. To conclude although there were other factors after the conference that furthered the increase in hostility the main reason for the beginning of the cold war was the Potsdam conference as it was there that the ideological differences became the most apparent thus leading to the disintegration of the alliance. ...read more.