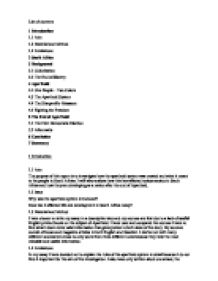 The purpose of this report is to investigate how the apartheid system was created and what it meant to the people in South Africa. I will also analyze how this has affected todays society in South Africa

List of contents 1 Introduction 1.1 Aim 1.3 Material and Method 1.4 Limitations 2 South Africa 3 Background 3.1 Colonization 3.2 The End of Slavery 4 Apartheid 4.1 One People - Two Colors 4.3 The Apartheid System 4.4 The Sharpeville-Massacre 4.5 Fighting for Freedom 5 The End of Apartheid 5.1 The First Democratic Election 5.2 Aftermaths 6 Conclusion 7 Summary 1 Introduction 1.1 Aim The purpose of this report is to investigate how the apartheid system was created and what it meant to the people in South Africa. I will also analyze how this has affected todays society in South Africa and how they are developing as a nation after the end of Apartheid. 1.2 Issue Why was the apartheid system introduced? How has it affected life and development in South Africa today? 1.3 Material and Method I have chosen to write my essay in a descriptive way and my sources are few due to a lack of useful English printed books on the subject of Apartheid. I have used and compared the sources I have to find what I deem to be valid information that gives justice to both sides of the story. My sources consist of books and magazine articles in both English and Swedish. I started out with many different sources but chose to only work from three different ones because they held the most valuable and usable information. ...read more.

The Boer language Afrikaans was also made an official language and with it the rift between the blacks and the whites grew additionally. In 1929 the government instated a racial separation system called Apartheid which roughly translates to "separatedness". Apartheid was the end of any kind of freedom for the black community.[8] The system divided the people of South Africa into four groups: ? Whites ? Blacks ? Asians ? Colored - Mixed race South Africans The new apartheid law made the black peoples' situation even worse. Relationships between blacks and whites were forbidden. Black people could not move where they wanted and they could not walk certain streets. Restaurants were divided into white and black and even toilets were specified to a certain color. A couple years later it was decided that all public areas would be divided, so playgrounds, cinemas and even busses were made black and white. Even schools and hospitals were bound to this law. Not only was it forbidden for black people to walk white areas, but they had to bring pass books to insure that they were allowed to stay in the area that they were entering. They had had enough. The ANC demonstrated and chose not to use any kinds of violence against their white government. The Boers answered with creating new laws against civil obedience. Protesters who wanted to get rid of the apartheid system was arrested and thrown into prison. ...read more.

nation to get a better view over their dark history that the ANC wanted to leave behind and start anew.[14] And so they did. I think the reason that South Africa is developing in such speed is the mentality that Nelson Mandela has taught his citizens. Respect, equality and peace makes a strong and stable ground to start with when rebuilding a torn down society like South Africa. 7 Summary The natives of South Africa were discriminated and abused by their white overlords, the Boers, for centuries. The Boers brought diseases and weapons that weakened the black tribes and then they enslaved the black people and worked them to their bones. Many generations passed without any change for the black people that, even though slavery was banned, still worked as indirect slaves and lived in poverty. The government created laws to prevent the black community to change anything about their tough situation. Violence and armed policemen was every day things for the black natives who could only dream of a free nation where a black man could sit, eat and walk anywhere he wanted to. As communication technology developed, the black people could share their story with the world and the world responded by turning their back on the South African government, an action that was so powerful that it made the president resign and in the long run led to a free country for both black and white, led by the great Nelson Mandela. ...read more.