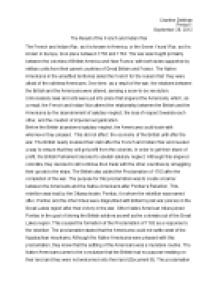 The Result of the French and Indian War

the British, because they were land hoards, were not concerned with how the Proclamation of 1763 and the abandonment of salutary neglect directly affected the colonists. They were only concerned with how it affected them, which exasperated the Americans. The beginning of the end of the French and Indian war was the beginning of a rivalry between a mother country and her child with hatred that would extend until the American Revolution. Before the French and Indian War, respect and honor existed between England and America. During the war, George Washington requested to serve under English General Edward Braddock. He wrote a letter to England stating that it would be a privilege to work under the general (Document C). but when General Braddock got himself killed as a result of not listening to Washington and assuming that the French are gentlemen, Washington lost respect for the English army. This small dim-witted event helped the respect towards the two countries slowly fade. When the Proclamation Line was created, the British didn?t care about how it affected America. They saw it as a benefit for themselves and took the advantage. This was a move that the British took towards the Americans as an act of disrespect. England and its Parliament weren?t concerned with the financial problems of America when they created the Sugar, Currency, and Stamp Acts, which placed taxes on a variety of mundane items. ...read more.

Grenville then created the Stamp Act. The responsibility of the Stamp Act was to create taxes on legal documents, diplomas, almanacs, broadsides, newspapers and playing cards. The colonists became furious with this act because they could no longer do as they please. The British also passed this act without the consent of the Americans. The British Parliament refused to let America represent themselves in parliament, which makes the Americans feel neglected. America's immediate response to the Stamp Act was boycott. The news spread like wildfire around the states regarding the boycott (Document H). When the British realized that they weren?t gaining any money from this act, they decided to repeal the act. The Americans were thrilled that the British repealed this act but the tension between the two countries was still there. The French and Indian War, which occurred for nine years in Northern America and seven years in Europe, aided the American Revolution. The war served as an instigator for the American War. Over time, as a result of the war, the relations between the British and the Americans were altered, sensing a soon-to-be revolution. Unnecessary laws and acts were put into place that angered the Americans, which, as a result, the French and Indian War altered the relationship between the British and the Americans by the abandonment of salutary neglect, the loss of respect towards each other, and the creation of imperial reorganization. ...read more.