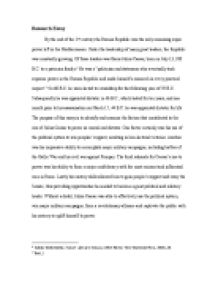 The Rise of Julius Caesar

﻿Research Essay By the end of the 2nd century the Roman Republic was the only remaining super power left in the Mediterranean. Under the leadership of many great leaders, the Republic was constantly growing. Of these leaders was Gaius Julius Caesar, born on July 13, 100 B.C. to a patrician family.[1] He was a ?politician and statesman who eventually took supreme power in the Roman Republic and made himself a monarch in every practical respect.?[2] In 60 B.C. he was elected to consulship for the following year of 59 B.C. Subsequently he was appointed dictator in 46 B.C., which lasted for ten years, and one month prior to his assassination on March 15, 44 B.C. he was appointed dictator for life. The purpose of this essay is to identify and examine the factors that contributed to the rise of Julius Caesar to power as consul and dictator. One factor certainly was his use of the political system to win peoples? support, resulting in his electoral victories. Another was his impressive ability to accomplish major military campaigns, including battles of the Gallic War and his civil war against Pompey. The third rationale for Caesar?s rise to power was his ability to form a major confederacy with the most eminent and influential men in Rome. ...read more.

Traditionally, slaves amassed in a campaign were the property of the commanding general, and represented one of the most lucrative sources of income for Caesar.[11] As such, his generous distribution of these slaves to his fellow soldiers only further increased their loyalty. Fortunately his great popularity amongst his armies, along with another smart military strategy, became an important factor in his success in the civil war against Pompey. While Pompey deployed his men in three lines with his most veteran legion on the flanks, Caesar deployed his men in three lines, six men deep. With this strategy, he was able to defeat Pompey. As such through his successful campaigns against the Gauls and Pompey, he was able to prove to his men that under his command, victory was ensured. This, along with his generosity, naturally produced strong loyalty, admiration and popularity amongst his men. Due to his brilliant and astute tactics, Julius Caesar was able to propel his armies to victory during the Gallic Wars and the Civil War, aiding his rise to power and gaining respect and wealth. Julius Caesar?s astounding ability to make alliances with other politicians and military leaders also allowed him to become a successful politician and military leader himself; and in the end rose to become Rome?s permanent dictator. ...read more.