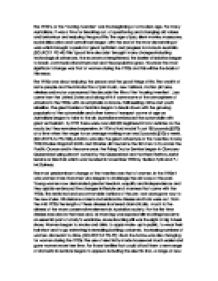 The Roaring Twenties in Australia.

The 1920's, or the "roaring twenties" was the beginning of a modern age. For many Australians, it was a time for breaking out, of questioning and changing old values and behaviour and enjoying the good life. The age of jazz, silent movies, massacres, social dislocation and turmoil had begun with the end of the most devastating of wars which brought a period of great optimism and progress for many in Australia. (SOURCE 1 PG 49) This "good time decade" brought many changes including technological advances, the economy strengthened, the barrier of isolation began to break, communications improved and the population grew. However the most significant change was that of women during the 1920s and this will be the basis of this essay. The 1920s was about enjoying the peace and the good things of life. The wealth of some people and the introduction of jazz music, new fashions, motion pictures, wireless and motor cars earned the decade the title of the "roaring twenties". Jazz came from the United States and along with it came some of the atmosphere of America in the 1920s, with an emphasis on booze, thrill seeking crime and youth rebellion. The great barrier of isolation began to break down with the growing popularity of the automobile and other forms of transport came of age as Australians began to take to the air. ...read more.

(SOURCE 3.3 PG 100) However for most Australian women their role in the 1920s remained the traditional one of wife and mother, her time filled in with domestic duties of the home. (SEE SOURCE IN "WOMEN IN THE 1920S BOOKLET, UNDER SEXUAL MORALITY IN THE TWENTIES) The social changes of the decade brought few real improvements in the position of women in Australian society. The war had not changed their traditional roles. Their contribution to the war effort had been restricted to the areas in which they were expected to serve - nursing, fundraising, knitting socks and other items for the troops, and filling jobs in offices that they were expected to vacate when the men returned. Many Australian women wanted to play active roles but the Australian Government refused to allow women to serve in the armed forces, although some 3000 served overseas as nurses. However, although during World War One women had taken the placeof men in many areas of employment, most women were still employed in traditional female occupations and even though women in the workforce worked the same hours as men, they received lower salaries. In 1928 the average weekly wage for a male was $10.40 but for a female it was only $8.80. In the clothing trade they often worked up to 90 hours a week. ...read more.

It was an achievement then for a woman to be elected to Parliament shortly after gaining this right, but Edith Cowan did this in 1921 when she was elected the member for West Perth. When she took her seat in the western Australian Legislative Assembly she became the first woman to be elected to any Australian Parliament. After this, organizations like the Edith Cowan's National Council of Women and the Women's service Guild appeared and had some success in influencing legislation in the 1920s. They also made people aware of "women's issues" and undoubtedly inspired many women who were not involved in politics with the belief that it was possible to change society in ways that benefited women. (SEE SOURCE 10.13 IN WOMEN IN THE 1920S BOOKLET) The changes that women brought to Australian society had a divisive impact as factors such as inequality in the workforce and in politics still existed for them. What was 'normal' or satisfying for one section of Australian society in the twenties was hardly so for others. There was as much cause for bitterness and grievance in the decade as for optimism and complacency. The twenties brought changes but no solutions to the underlying conflicts that had deepened by the war especially for women as the war had not changed their traditional roles, and even if there was a slight change in traditional roles, not all Australians welcomed this traditional change as many were horrified by what they saw as a decline in manners, values and behaviour. ...read more.