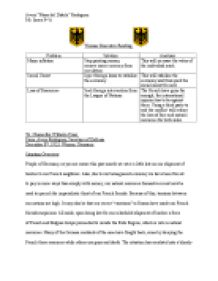 The Ruhr Crisis- viewed from the German perspective

﻿Avery ?Mano del Diablo? Rodriguez Mr. Jones 3rd A Weimar Executive Briefing Problem Solution Analysis Major inflation Stop printing money, remove some currency from circulation. This will increase the value of the individual mark. Social Unrest Inject foreign loans to stabilize the economy. This will stabilize the economy and thus quell the social unrest for now. Loss of Resources Seek foreign intervention from the League of Nations . The French have gone far enough; the international opinion has to be against them. Using a third party to end the conflict will reduce the loss of face and natural resources for both sides. To: Chancellor Wilhelm Cuno From: Avery Rodriguez, Secretary of Defense December 8th, 1923. Weimar, Germany. Situation Overview People of Germany, as you are aware this past month we were a little late on our shipment of lumber to our French neighbors. Alas, due to our beleaguered economy we have been forced to pay in more ways than simply with money; our natural resources themselves must now be used to quench the imperialistic thirst of our French friends. ...read more.

The solution to this problem, my friend, is simple. If we are to stop this hyperinflation and increase the value of the German mark, then we must stop the presses; no more money can mindlessly be printed. On top of that, we should consider actively removing some money from circulation. If we do this, the value of the mark will increase because they will not be so common. Marks will be treated with greater value when people learn that they do not have as many bills in their pocket. Either way, the additional printing of marks must be stopped. Problem 2: Social unrest The people of Germany grow uneasy with their country. Their government provides them a failing economy and the French occupation makes us look weak. I fear it may not be long before a more radical movement takes place. I believe the best way to combat this dangerous social setting is to stabilize the economy through the injection of foreign loans. ...read more.

Years ago Germany would have met such a threat, but those days are over. Our economy can barely support us now, let alone a war effort! Worst of all, the German people are tired. They?ve seen war and want nothing of it. However, we cannot abandon the Ruhr region either. If we abandon German people in the Ruhr region (to the French, no less) then consider how our image will be twisted. Thus, if we cannot fight back nor can we surrender the region, we must ask for a third party?s interference. Asking the League of Nations for intervention will be a compromise that neither puts Germany under extreme stress nor does it antagonize the German nation. We do not seem to cower under France, we merely ask for them to contain their imperialistic notions, while Germany doesn?t have to take any actions itself! Beg for them to put a leash on the French dogs who have so passionately hunted that which was already defeated years ago. The Allied aggression has created enough sympathy for Germany to provide a high chance of the League hearing our plea. ...read more.