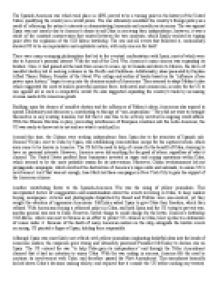 The Spanish American War of 1898

Transfer-Encoding: chunked ﻿The Spanish American war which took place in 1898, proved to be a turning point in the history of the United States, qualifying the country as a world power. The war ultimately remolded the country?s foreign policy as a result of reforming the nation?s interests in demonstrating humanity and morality as its norms. The war against Spain was not merely due to America?s desire to aid Cuba in receiving their independence; however, it was a result of the constant controversies that existed between the two countries, which finally reached its tipping point after the explosion of the USS Maine battleship. The war and all events that followed it, continuously showed US to be an imperialistic and capitalistic nation, with only concern for itself. There were many emerging philosophies that led to the eventual confrontation with Spain, most of which were due to America?s personal interest. With the end of the Civil War, America?s main concern was expanding its borders. Once it had gained all the land from ocean to ocean, up to Canada and down to Mexico, the drive of manifest destiny led to seeking colonies in the Pacific and Caribbean. ...read more.

As if that was not enough, Jose Marti led these campaigns in New York City to gain the support of the American citizens. Another contributing factor to the Spanish-American War was the rising of yellow journalism. This incorporated tactics of exaggeration and sensationalism about the events occurring in Cuba, to keep readers buying newspapers. Articles and photographs dispatched by Hearst and Pulitzer were non-existent, yet they caught the attention of ingenuous Americans. McKinley asked Spain to give Cuba their freedom, which they refused. With Americans forcing a reformed policy in Cuba, and both Spain and the US trying to prevent war, another general was sent to Cuba. However, before things to could change for the better, America?s battleship USS Maine, which was sent to Havana in an effort to protect US citizens in Cuba, blew up due to a detonation of mines under it. Because of the death of many American sailors on the ship, alongside the hostile events occurring, US pointed a finger at Spain, holding them responsible. Although Spain was most likely not at fault, with yellow journalism implanting doubtful ideas into the heads of American readers, the suspicion grew strong and ultimately pressured President McKinley to declare war on Spain. ...read more.

Their ?help? led to the development of the Hay-Buneau Treaty, in which the US guaranteed independence of Panama in return for a permanent lease on a strip for the canal. The canal was to be operated and managed by the US in sovereignty, paying Panama 10 million at the start, followed by an annuity of $250,000. Moreover, the canal became another means of profit to the US as they charged other nations fares in order to use it; deeming it a great investment. In an effort to expand its own nation and prevent the expansion of other European nations, Roosevelt created the Roosevelt Corollary. This extension of the Monroe Doctrine, gave US the right to intervene in the Caribbean and Central America, if it sought necessary due to economic concerns that may arise. Roosevelt had realized that European countries had lent far more money then was repayable to these countries, eventually leading to financial difficulties and a need for outside economic control. However, the US did not want to give European countries that advantage, and therefore offered an extending hand to ensure his neighboring countries were remained ?stable, orderly and prosperous.? This was US?s new means of controlling the entities within the Western Hemisphere. ...read more.