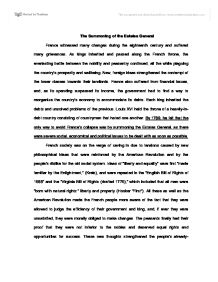 The Summoning of the Estates General

The Summoning of the Estates General France witnessed many changes during the eighteenth century and suffered many grievances. As kings inherited and passed along the French throne, the everlasting battle between the nobility and peasantry continued, all the while plaguing the country's prosperity and wellbeing. New, foreign ideas strengthened the contempt of the lower classes towards their landlords. France also suffered from financial issues, and, as its spending surpassed its income, the government had to find a way to reorganize the country's economy to accommodate its debts. Each king inherited the debts and unsolved problems of the previous. Louis XVI held the throne of a heavily-in-debt country consisting of countrymen that hated one another. By 1789, he felt that the only way to avoid France's collapse was by summoning the Estates General, as there were severe social, economical and political issues to be dealt with as soon as possible. French society was on the verge of caving in due to tensions caused by new philosophical ideas that were reinforced by the American Revolution and by the people's dislike for the old social system. ...read more.

The people required of the new government that it treat all men equally and insisted that, when the law was concerned, no special treatment be given to anyone, no matter their background or family. France had severe financial issues because the people were being forced to pay taxes they could not afford and the country was already very deep in debt. Taxes were "paid almost wholly," by the lower classes (Cahier), and they were heavily burdened with taxes on everything ranging from salt and bread, to tobacco, fairs, and markets ("Cahier"). This forced them to live in terrible conditions as they could not afford much more. It angered them that they paid all the taxes, and they included in the Cahiers des Doleances that they wanted all classes to pay taxes "without exception" ("Cahier"). France's government was "nearly bankrupt" and about half its income was used on paying debts, as they had spent lots of money on the Seven Years' War and had "more or less paid for" the American Revolution (Halsall). Together, the costs of the two wars would have left France, a country that was not entirely poor, struggling to continue without making huge changes to spending, income, importation and taxes. ...read more.

Parliaments consisted only of nobles, most of whom were greedy men seeking out their own ascent to a greater power. They were handed opportunity when Louis XVI reinstated the parliaments and increased there importance to the government. Had he not, they may never have been after to stop his reformations and he may never have had to deal with the countrymen's ambition and plans. The Estates General was the only way Louis XVI could save France from an oncoming, ugly civil war between its nobility and the bulk of its population, the peasantry. Personally, he suffered the consequences as he lost almost all his power, becoming the people's rag doll, forced to do as they please. The Estates General gave the Third Estate what they wanted: a right to express opinion in the nation's and their own future. Les Cahiers de Doleances are a perfect example. Had Louis XVI not summoned the Estates General, the people's anger and frustration would have continued building to the breaking point and their reaction would have been much more uncompromising. ...read more.