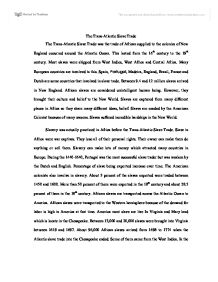 The Trans-Atlantic Slave Trade The Trans-Atlantic Slave Trade was the trade of African supplied to the colonies of New England occurred around the Atlantic Ocean. This lasted from the 16th century to the 19th century. Most slaves were shipped from West Indies, West Africa and Central Africa. Many European countries are involved in this. Spain, Portugal, Madeira, England, Brazil, France and Dutch are some countries that involved in slave trade. Between 9.4 and 12 million slaves arrived in New England. African slaves are considered unintelligent human being. However, they brought their culture and belief to the New World. Slaves are captured from many different places in Africa so they share many different ideas, belief. Slaves are needed by the American Colonist because of many reasons. Slaves suffered incredible hardships in the New World. Slavery was actually practiced in Africa before the Trans-Atlantic Slave Trade. Slave in Africa were war captives. They lose all of their personal rights. ...read more.

Most ships provided slaves with enough room to sit upright, but not enough to stand. Other slaves were forced to lie in chain with barely 20 inches space between them. Slave merchants Attempted to keep as many slaves alive as possible to maximize profits, but treatment was extremely cruel. Sick slaves were thrown into the ocean to prevent infection from spreading. Some slaves refused to eat so slave merchants used tools to pry open their mouth and force food down their throat. After the slaves get off the ship, they got branded with hot iron to identify them as slaves and then placed in a pen. These things are how most slaves are treated. The Triangular Trade is a famous trade route. European manufactured goods, namely cloth, metal wares and guns. They go to Africa and trade these stuffs for slaves. Then they brought the slaves to the Caribbean and Americas. There they trade slave for money, sugar, molasses, American products, and etc. ...read more.

African Slaves are needed by other countries also. In the West Indies, slaves are needed to make rums, molasses, and many other things. Britain needed slaves to trade with other countries to gain profits. Slaves are necessary in America because it strengthen New England's economy. Even though slaves are forced to go to America, they brought many things with them. Slaves come from many different part of Africa. Because of that, slaves speak different languages and shared different culture and belief. Many slaves are forbidden from carry anything when they are shipped to America. However, they still brought folk poems, folk's story, traditional song and ballads to America. Many of these songs, poems, and stories are about their tradition, culture, and what would it like to be free. When being forced to work in a field, they shared many songs to ease away the pain and keep them collapsing. They also brought their religion to America. For example, some slaves are Christians. They also brought many other things to America such as their traditional foods and customs. ...read more.