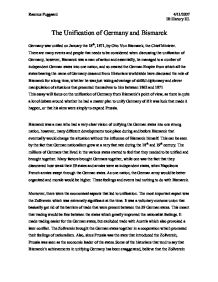 The Unification of Germany

The Unification of Germany and Bismarck Germany was unified on January the 18th, 1871, by Otto Von Bismarck, the Chief Minister. There are many events and people that needs to be considered when discussing the unification of Germany, however, Bismarck was a man of action and essentially, he managed to a number of independent German states into one nation, and so created the German Empire from which all the states bearing the name of Germany descend from. Historians worldwide have discussed the role of Bismarck for a long time, whether he was just taking advantage of skilful diplomacy and clever manipulation of situations that presented themselves to him between 1862 and 1871 This essay will focus on the unification of Germany from Bismarck's point of view, as there is quite a lot of debate around whether he had a master plan to unify Germany of if it was luck that made it happen, or that his aims were simply to expand Prussia. Bismarck was a man who had a very clear vision of unifying the German states into one strong nation, however, many different developments took place during and before Bismarck that eventually would change the situation without the influence of Bismarck himself. ...read more.

Austria made a proposal for the members of the Bund to meet and discuss a reform of the military, economic and legal powers. However, Bismarck was not interested and he convinced the Prussian king to ignore the conference, and hence since there were no Prussians present at the meeting it collapsed. Bismarck tried to reinforce his ideas that the Prussian state was superior and that it was the main German state, as well as insulting and humiliating the Austrians. He succeeded in pushing the Austrians away and separating the nations even further, which made the Germans more nationalistically conscious. As a new crisis was started, Bismarck once again had a vision to turn the situation into his favour. This time it was the duchies crisis. Bismarck wanted to separate Schleswig and Holstein from Denmark, and therefore he tried to convince the Prussian king to restore the London Protocol, which would support the Danish king's claim to the duchies. Some German states did not agree with this act, however, Austria did, and hence an alliance between Prussia and Austria was formed in 1863. ...read more.

Bismarck had provoked the French king and this lead to a war between France and north German confederation. However, the war brought the north and the south together, so once again Bismarck has planned a way to gain unification. On the 18th of January 1871, Germany was finally unified and King William became Kaiser William of the German Empire. In conclusion, Bismarck definitely had a role to play in the unification of Germany. Of course, there are factors that Bismarck did not control that moved towards a unified Germany, such as the growing nationalism, the economical improvements and such, that took place before Bismarck came to power, but without Bismarck's presence and planning, the unification may have never taken place or it would slow the process down considerably. I believe that Bismarck was the reason for Germanys unification, due to the fact that he reformed the military which was highly needed against Austria and later France. Also, he set up conflicts that would lead to the German people cooperating against common goals, such as the war with France where the north and south joined up. In my view, Bismarck was a master planner who foresaw events and conflicts and turned them into his favour. ?? ?? ?? ?? Rasmus Puggaard 4/11/2007 IB History HL ...read more.