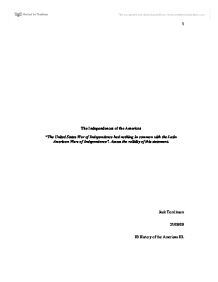 The Independences of the Americas "The United States War of Independence had nothing in common with the Latin American Wars of Independence". Assess the validity of this statement. Jack Tomlinson 25/09/08 IB History of the Americas HL The American Revolution was one of the most influential independences in the world, as it encompassed the majority of the world at the time, the colonists, the Spanish, the French the British Crown. The colonists were rebelling against the British Crown for mainly the idea that the taxes were unbearable and that the Patriots, or the group that wanted independence, thought that independence was necessary to escape British control. However they did not have the power necessary to confront the British, as they were the most powerful military force at the time, and thus they asked for assistance from foreign aid, which in this case was the French. The French agreed to the call for aid and thus called upon their ties with the Spanish to help them topple the greatest military power at the time, the British Crown. A similar dilemma was occurring in Latin America as there were groups that sought independence from the Spanish Crown due to the mercantilist policies and conflicts arose between the Patriots and the Royalists, those that were loyal to the Spanish Monarchy and thus great wars were fought for the Independences of Latin America. ...read more.

Theoretically, the colonies were designed to be economically complementary to Spain. Manufacturing was forbidden in certain colonies to keep the market open for imports. The economic health of the colony was always a secondary consideration. All colonial trade was channeled through a single port, first Seville until 1720, and then Cadiz. After 1765 this policy was relaxed to allow trade by other Spanish ports." (Rempel, lecture) Ultimately both of the Independences of North and South America occurred because of the mercantilist policies that the Mother country had inflicted upon their colonies. Another existing parallel of these two independences is that both of them were lead by intellectuals that believed in the Enlightenment. The Enlightenment is defined simply as the philosophical movement of the eighteenth century that celebrated reason - clarity of thought and statement, scientific thinking, and a person's ability to perfect oneself. The American Revolution was lead by intellectuals such as Benjamin Franklin. This man had an important role in the American Revolution, Benjamin Franklin, "with three other members of the Committee of Correspondence set up by Congress in November 1775 to make contact with our friends abroad , met with Archard de Bonvouloir and were instructed to open a dialogue on a possible alliance" (Axelrod, 242). Franklin accomplished his task by June of 1776 where "millions of dollars worth of military aid were funneled to the Revolution where France concluded an official alliance" (Axelrod, 243). ...read more.