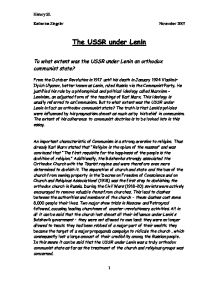 The USSR under Lenin

The USSR under Lenin To what extent was the USSR under Lenin an orthodox communist state? From the October Revolution in 1917 until his death in January 1924 Vladimir Ilyich Ulyanov, better known as Lenin, ruled Russia via the Communist Party. He justified his rule by a philosophical and political ideology called Marxism-Leninism, an adjusted form of the teachings of Karl Marx. This ideology is usually referred to as Communism. But to what extent was the USSR under Lenin in fact an orthodox communist state? The truth is that Lenin's policies were influenced by his pragmatism almost as much as by his belief in communism. The extent of his adherence to communist doctrine is to be looked into in this essay. An important characteristic of Communism is a strong aversion to religion. Thus already Karl Marx stated that "Religion is the opium of the masses" and was convinced that "The first requisite for the happiness of the people is the abolition of religion." Additionally, the Bolsheviks strongly associated the Orthodox Church with the Tsarist regime and were therefore even more determined to abolish it. The separation of church and state and the ban of the church from owning property in the 'Decree on Freedom of Conscience and on Church and Religious Associations' (1918) was the first step to abolishing the orthodox church in Russia. During the Civil Wars (1918-20) soviets were actively encouraged to remove valuable items from churches. ...read more.

Still the so called "World Revolution" remained the main priority in Lenin's foreign policy; although the reasons for this were not purely the ideological conviction that communism was the superior social system. The Bolsheviks were also aware of the fact that the position of Russia in international politics was far from secure, and were therefore most eager to help establishing communist governments in other countries, most preferably in the highly industrialised countries of central and Western Europe. To this end the so called "Comintern" under the leadership of Grigory Zinoviev was founded in March 1919. The aim of the Comintern was promote revolutions in industrial countries by sending agents abroad, who were to offer help and advice to local communist movements. The help the Comintern offered was of a mostly financial nature - Lenin himself told an agent of the Comintern in 1918 not to "stint at spending millions for agitation (...)." The countries of most interest to Lenin were Britain, Switzerland and most importantly Germany, being the most industrialised and at the same time most instable of the three, having suffered greatly during the war. Although the work of the Comintern did initially bring about some results - Hungary became a Soviet republic in 1919, and communist parties in Germany and Britain seemed to gain more political influence - the success didn't prove to be long-lived, and most of the communist activities outside Russia were almost completely suppressed by the mid-1920s. ...read more.

All in all it can be said that Lenin's economic policies, just like his foreign policies, were, although based on communist principles, essentially pragmatic. Clear breaks with communist doctrine were accepted for the greater good. All this allows the conclusion that Lenin's economic policy was by all means in no way that of an orthodox communist state. All in all it can be concluded that the USSR under Lenin was only to a limited extent an orthodox communist state. Although certain communist principles such as atheism and the equality of the genders were at least attempted to be adhered to, both the economy and the foreign policy remained to be influenced by Lenin's pragmatism much more than by communist principles. The essay has so far dealt with assessing to what extent the USSR under Lenin was an orthodox communist state. An orthodox communist state has been understood to be a state in which policies are mainly inspired by Marxist ideals. But as soon as a closer look at Marxist theory is taken it becomes clear that such a definition and therefore the investigation itself contains a paradox. One of the most basic principles and ideals of communism, which is understood to be the final stage of the class struggle, is the abolition of the state. Therefore assessing to what extent a state is communist is impossible - as long there is a state we cannot speak of communism. There is no such thing as a communist state! Words: 1.900 ?? ?? ?? ?? History SL Katharina Ziegeler November 2007 1 ...read more.