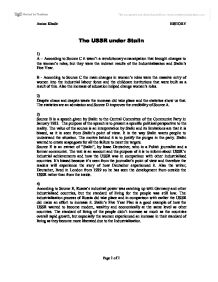 The USSR under Stalin

The USSR under Stalin 1) A - According to Source C it wasn't a revolutionary emancipation that brought changes to the women's roles, but they were the indirect results of the Industrialisation and Stalin's Five Year. B - According to Source C the main changes in women's roles were the massive entry of women into the industrial labour force and the childcare institutions that were built as a result of this. Also the increase of education helped change women's roles. ...read more.

The value of the source is an interpretation by Stalin and its limitations are that it is biased, as it is seen from Stalin's point of view. It is the way Stalin wants people to understand the situation. The motive behind it is to justify the purges in the party. Stalin wanted to create scapegoats for all the failure to meet the targets. Source E is an extract of "Stalin", by Isaac Deutscher, who is a Polish journalist and a former communist. ...read more.

The industrialisation process of Russia did take place and in comparison with earlier the USSR did make an effort to increase it. Stalin's Five Year Plan is a good example of how the USSR wanted to become modern, wealthy and economically at the same level as other countries. The standard of living of the people didn't increase as much as the countries overall rapid growth, but especially the women experienced an increase in their standard of living as they become more liberated due to the Industrialisation. Amine Khadir HISTORY Page 1 of 2 ...read more.