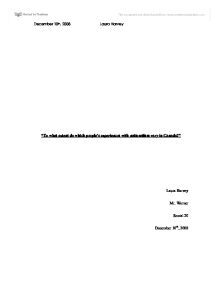 The Variation of Nationalism in Canada

"To what extent do which people's experiences with nationalism vary in Canada?" Laura Harvey Mr. Warner Social 20 December 10th, 2008 Nationalism in Canada varies distinctly due to its comprehensive mosaic of different cultures. Nationalism can be defined as the collective acumen that people have of their nation, and how the progression of their culture cerebrates their attitudes reflected upon society. Altered perspectives of Canadian nationalism are demonstrated throughout the fundamentals of cultures in Canada such as their beliefs, customs, and traditions. The variation of nationalism in Canada is clearly demonstrated between the perspectives of the Chinese Canadians, the Dutch Canadians, and the French Canadians. The Chinese Canadians are among one of the many cultures in Canada that carry a very different perspective of nationalism by reason of their historical experiences, customs, and symbols they share. Chinese immigrants have been immigrating to Canada since 1788 in hopes of monetary gain and a new homeland. Originally, the Canadian government felt the immigrants were "substandard" and thus imposed heavy taxes on the immigrants (Levitt, 2008). One form of these taxes, noted as "head tax", was ordained in 1885 as a classification of racial discrimination because only people of Chinese heritage were required to pay this tax. As the Canadian government continued their effort to prevent further Chinese immigration into Canada, the Chinese Immigration Act of 1923 was brought forth. ...read more.

Today there are approximately one million thirty thousand people of Dutch origin living in Canada (Canadian Encyclopaedia, 2008). Most of the Dutch immigrated to Canada during World War II because of the threatening conditions in Europe. Canada was their choice of immigration due to the thriving relationship between the Netherlands and Canada. Pat Ropchan, an immigrant from the Netherlands, arrived in Alberta in the fifties and found it rather easy to settle into the humble location. However, along with the easy settlement came the pressure of assimilation by Canada that Pat felt exposed to. Due to the limited amount of Dutch people living in Canada at the time it was extremely difficult to preserve her Dutch traditions and thus assimilation took its place. Pat believes that the assimilation was indeed a "good thing" because in terms of nationalism it gave the Dutch Canadians a way to feel connected through shared experiences (Ropchan, 2008). In fact, because of their shared cultural heritage the Dutch Canadians are sometimes referred to as "Dutch Bingo" where it is said that a Dutch Canadian is able to figure out his/her connection to another Dutch Canadian by asking questions about the other's last name, town of birth, church and the college they attended (The Canadian Encyclopedia, 2008). A few shared customs of the Dutch Canadians include bike-riding, wooden clogs, and assorted pastries. ...read more.