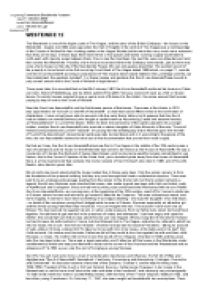 The Westeinde is one of the higher parts of The Hague, and the story of the British Embassy - the house on the Westeinde - begins over 500 years ago when the Hall of Knights in the centre of The Hague was a hunting lodge

﻿vergadering Commissie Beeldende Kunsten datum 11 oktober 2000 locatie Van Assendelftkapel auteur Michiel de Ligt bladnummer / WESTEINDE 12 The Westeinde is one of the higher parts of The Hague, and the story of the British Embassy - the house on the Westeinde - begins over 500 years ago when the Hall of Knights in the centre of The Hague was a hunting lodge of the Counts of Holland for their hunting parties in the Hague Woods (which were then very much more extensive than they are to-day). In those days there were three or four great sand dunes running roughly south-west to north-east, with marshy areas between them. One is now the Sportlaan, the next the Laan van Meerdervoort and then comes the Westeinde. Possibly a farm house once stood where the Embassy now stands, just as there was once a farm house on the site of the Noordeinde Palace. We can only guess about that. The earliest record of the property is to be found in the first surviving Court Book of The Hague dated 1458 which, on page 71, records one Gerrit van Assendelft as being in possession of "the houses which stand between the Lorrestege and the Jan Heynriczsstraet, the gardens included". For these houses and gardens this Gerrit van Assendelft was bound to pay a small annual rent to the Count of Holland of eight denarii. Three years later it is recorded that on the 8th February 1461 Gerrit van Assendelft conferred his house on Pieter van Dam, Abbot of Middelburg, and by letters patent of the 20th February received it back as a fief, or feudal tenure, for which he was required to pay a yearly sum of 8 denarii to the Abbot - the same amount that he was paying by way of rent to the Count of Holland. Now this Gerrit van Assendelft is not the first known person of that name. ...read more.

The old house changed hands first by inheritance within the Assendelft family and then passed through marriage to the Renesse family, until it was bought in 1677, by the King of Spain, and became the Spanish Embassy. The existing house, in the 212 years of its existence seems never to have had any other occupant than the head of a diplomatic mission. Few, if any, other houses in the world can match this record. We, the British, have been proud and happy to have the house first as our Legation, and, since the Second World War, as our Embassy for over 105 years. I am the twentieth British incumbent. So far as I know the only other British Residences that can claim a longer occupation are in Paris and Copenhagen. And an interesting coincidence is that the Minister who negotiated the first lease of the Legation in Copenhagen was - Sir Andew Buchanan. Everyone who has lived in the house en the Westeinde has found it a very pleasant house. Sir Horace Rumbold who was Minister from 1888 to 1896 writes in his memoirs: "The commonplace entrance, up a few stairs under the archway, little prepared one for the really fine proportions of the suite of reception rooms on the ground floor, the main feature of which was a beautiful ballroom nearly forty feet square with a perfect parquet floor, for which, in after years, I would have given a great deal at the wretchedly scamped Embassy House in ball-loving Vienna", and he also writes: "The Legation, which became for us so attractive a home, fully deserves more particular description, being in some respects the most interesting house I ever occupied in the many changes in my career. lt was situated in the old street called Westeinde, or, as its name denotes, the western region of the town, whence, contrary to the tendency observable in other capitals, the tide of wealth and fashion had long set in other directions. ...read more.

joint hosts, celebrated the occasion with a dinner in the Ball Room, which Queen Juliana graciously attended, as well as the Prime Minister Dr. Drees. When Queen Elizabeth II came herself to Holland on a State Visit in 1958 she did not come to the Embassy, but went instead to the Canadian Embassy because the Canadian Ambassador was at that time the senior CommonweaIth Representative. But the Grote Kerk, which towers above us, and whose great bell had sounded dirges for Gerrit van Assendelft 492 years earlier, pealed out its carillon throughout the day in The Queen's honour. Four years ago, my predecessor, Sir Adrew Noble, gave a hall to celebrate the 100th anniversary of this house as the British Legation or Embassy and Her Majesty Queen Juliana and Their Royal Highnesses Prince Bernhard, Princess Beatrix and Princess Irene honoured this ball with their presence. And in May of last year my wife and I gave a dinner for Princess Margaret and Lord Snowdon when they came to Holland for the British Week in Amsterdam. Princess Beatrix was unfortunately prevented by illness from attending and Princess Margriet was good enough to take Her place at short notice. But I would like to end with a story taken, once again, from the memoirs of Sir Horace Rumbold, whose mission in The Hague covered the last years of the reign of King William III, and the accession of Queen Wilhelmina at the age of 10. One day a messenger came from the Palace with the following invitation addressed to Lady Rumbold. The invitation was in French but I translate it into English: "By order of the Queen Regent, Mlle, van de Poll requests Lady Rumbold to allow her son Hugo to come and play with Her Majesty The Queen". Sir Horace Rumbold comments that, according to the accounts brought back by the boy thus privileged to be one of Her playmates, the Iittle Queen, while the most gracious of hostesses, could be the greatest of romps". ...read more.