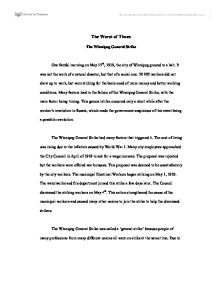 The Worst of Times The Winnipeg General Strike One fateful morning on May 15th, 1919, the city of Winnipeg ground to a halt. It was not the work of a natural disaster, but that of a social one. 30 000 workers did not show up to work, but were striking for the basic need of more money and better working conditions. Many factors lead to the failure of the Winnipeg General Strike, with the main factor being timing. This general strike occurred only a short while after the worker's revolution in Russia, which made the government suspicious of this event being a possible revolution. The Winnipeg General Strike had many factors that triggered it. The cost of living was rising due to the inflation caused by World War 1. Many city employees approached the City Council in April of 1919 to ask for a wage increase. The proposal was rejected but the workers were offered war bonuses. This proposal was deemed to be unsatisfactory by the city workers. ...read more.

As a result the jobs that they did get were low paying and had very dirty working conditions. It was only after the 1920's, and the Winnipeg General Strike, that the government provided a law based on fair and just working conditions. I think that the workers' demands were very reasonable at the time. Better wages could have easily been given because due to inflation, employers were making more money, and could easily have given the extra profit onto their employees. The main cause of the strike was the one that employers were benefiting most from. The improvement of working conditions would be harder to achieve but was still very reasonable. Many people worked in miserable conditions and due to their low pay they had to live near their work, usually factories, which was very dirty and unhealthy. Many workers, even children, got severely injured or even died at work, with little pay. If the males died their family would have no way to support themselves, as in the 1920's the male was still the main 'breadwinner' for the family. ...read more.

I think that the strike was unsuccessful. It just created more tensions between employers and employees as well as well as increasing tensions between immigrants and native-born Canadians. The leaders of the strike were convicted of conspiracy, and 3 immigrants were deported. This fact is proven through the following quote. "Seven of the arrested leaders were unfairly convicted of a conspiracy to overthrow the government." It took another 30 years before tensions and the fear of unions died down, and Canadian workers secured union recognition and collective bargaining rights. Due to all the reasons listed above, I believe that the Winnipeg General Strike was a failure, and did more harm to Canadians than it did good for the general public. The Winnipeg General Strike can be considered as a wake-up call to the Canadian government of its' time period. It told the government of the condition of the workers and the displeasure that they had. However, their fear of communism stopped them from allowing the workers to receive the treatment that they deserved. However, no one will ever know if the Winnipeg General Strike was actually a part of a communist movement or the workers call for fairer treatment. ...read more.