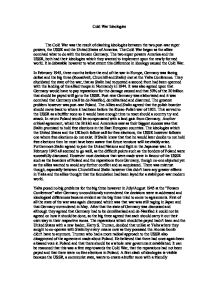 Cold War Ideologies The Cold War was the result of clashing ideologies between the two post-war super powers, the USSR and the United States of America. The Cold War began as the allies connived what to do with the broken Germany. The two super powers America and the USSR, both had their ideologies which they wanted to implement upon the newly formed world. It is debatable however to what extent this difference in ideology caused the Cold War. In February 1945, three months before the end of the war in Europe, Germany was facing defeat and the big three (Rooselvelt, Churchill and Stalin) met at the Yalta Conference. They elucidated the state of the war, that as Stalin had requested a second front had been openned with the landing of the allied troops in Normandy in 1944. ...read more.

If Stalin knew that that he would later decide to not hold free elections then he must have been aware that future tensions will inevitably arise. Furthermore Stalin agreed to join the United Nations and fight in the Japanese war. In February 1945 all seemed to go well, as the difficult points such as the borders of Poland were succesfully discussed. However most decisions that were made were in favour of the USSR such as the boarders of Poland and the reparations from Germany, though no-one objected yet as the allies wanted to avoid any further conflict and so acquiesced. There was mistrust though, especially between Churchill and Stalin however this didn't have any greater effects in Yalta and the allies thought that the foundation had been layed for a stabil post-war modern world. ...read more.

Truman who had a more radical approach to the USSR also disapproved of the agreement made about Poland. He believed that there had once again been a biased vote in Poland and that there should be a whole new government established. It can be reasoned that this was a first step towards the Cold War, that the reparations had not been payed and that there were no free elections in Poland. A first clash of ideologies is visible because the USSR, a communist state, wants to create a buffer zone with a friendly government, the USA however want to achieve a liberated free market Europe and therefore want completely "free elections" in Poland. Furthermore not only Poland was under Soviet influence but also Romania and Bulgaria, and although he didn't want to acquiesce to the "Percentage Agreement" made by Stalin and Chruchill Truman could not without force shift the red army away from the Eastern European countries. ...read more.