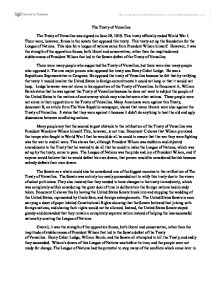 The United States Senate is seen carrying a sheet of paper labeled Constitutional Rights showing that the Senate believed that joining with foreign nations, and sharing their rights would not be allowed. Instead, the United States Senate stayed greedy and demanded that they remain a completely separate nation instead of helping the less successful nations by creating the League of Nations Overall, it was the strength of the opposition forces, both liberal and conservative, rather than the ineptitude of stubbornness of President Wilson that led to the Senate defeat of the Treaty of Versailles. Henry Cabot Lodge, William Boroh, and the Senate all attempted to kill the Treaty, and sadly they succeeded. Wilson's dream of this League of Nations was before its time, and the people were not ready for change. The League of Nations had the potential to stop many of the conflicts which arose later in time, however, the people, were simply not ready for such a change, and like many Americans did not want to share their freedom with other nations, they simply remained greedy, selfish, and foolish. It was President Wilson's own ineptitude and stubbornness that led to the Senate defeat of the Treaty of Versailles rather than the strength of the opposition forces. ...read more.

He stated that if it weren't for Wilson's pigheadedness, the treaty could have worked out to please everyone. It is true that Henry Cabot Lodge and the Republican majority in the Senate were a force in the defeat of the treaty. By holding off the vote and making his own reservations to the treaty, Lodge knew that he was using Wilson's hatred to his advantage. Wilson would have accepted the reservations if they had been proposed by one of his fellow Democrats, but the fact that they had been written by Lodge made Wilson see red. He immediately ordered Democrats to vote entirely against the treaty with the added Lodge reservations. The only possible path to ratification would be to accept the treaty with the new reservations. Wilson chose to block the passing of the treaty by persuading Democrats to vote against it. The blame for the failure of the Treaty of Versailles falls solely into the hands of President Wilson. Rather than allowing the Senate to work through the knots of the treaty, Wilson murdered his own work because of bad blood between Lodge and himself. Wilson's stubbornness destroyed any chances of the treaty's success, and the blame of the matter lies entirely with him. ?? ?? ?? ?? ...read more.