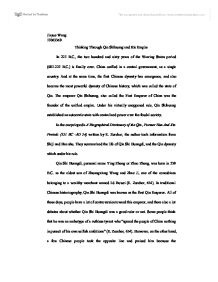 Thinking Through Qin Shihuang and His Empire. The emperor Qin Shihuang, also called the First Emperor of China was the founder of the unified empire. Under his virtually unopposed rule, Qin Shihuang established an autocratic state with centralized power o

Jiayue Wang 11063369 Thinking Through Qin Shihuang and His Empire In 221 B.C., the two hundred and sixty years of the Warring States period (481-221 B.C.) is finally over. China unified in a central government, as a single country. And at the same time, the first Chinese dynasty has emergence, and also become the most powerful dynasty of Chinese history, which was called the state of Qin. The emperor Qin Shihuang, also called the First Emperor of China was the founder of the unified empire. Under his virtually unopposed rule, Qin Shihuang established an autocratic state with centralized power over the feudal society. In the encyclopedia A Biographical Dictionary of the Qin, Former Han And Xin Periods (221 BC -AD 24) written by E. Zurcher, the author took information from Shiji and Han shu. They summarized the life of Qin Shi Huangdi, and the Qin dynasty which under his rule. Qin Shi Huangdi, personal name Ying Zheng or Zhao Zheng, was born in 259 B.C. as the eldest son of Zhuangxiang Wang and Zhao Ji, one of the concubines belonging to a wealthy merchant named L� Buwei (E. Zurcher, 654). In traditional Chinese historiography, Qin Shi Huangdi was known as the first Qin Emperor. All of these days, people have a lot of controversies toward this emperor, and there also a lot debates about whether Qin Shi Huangdi was a good ruler or not. ...read more.

Qin Shihuang established prefectures and counties with further townships. These were put under the control of military and administrative officials who were his direct appointees. The state was divided into thirty-six prefectures with counties under their jurisdiction. This system was different from the previous dynasties, which had loose alliances and federations, which means people could no longer be identified be their native region or former feudal state. This website is just stating the facts in detailed, and there is not judgment or bias. The author describe Qin Shihuang's unification by using map and picture, which makes me feel clear about Qin Shihuang's strategy and his route way. Compare with the encyclopedia and the website, my another source which was an article I found in WSU library named China's First Empire by Loewe, Michael showed a little biased to this first emperor of China. Obviously, Qin Shihuang was a ruthless tyrant, but under his leadership, he built many brilliant achievements. However, as I read through China's First Empire, I found that the author only wrote a little on Qin Shihuang's achievements, but focus on his cruel behavior. Loewe used thousands of words to prove his thesis which was Qin Shihuang was a ruthless tyrant, and people were under a big suffering while he was ruling. Loewe wrote his article began with the discovery of the underground soldiers, which known as terra-cotta warriors. ...read more.

In his book, Derk believed that Li Ssu might be the key for the achievements of Qin Shihuang. The author described a lot of facts to support his thesis, and all the evidence were presented logically. But there were some ancient names and details which really made me hard to understand. On the whole, the stories in this book were interesting, and it was a lot of fun to read them. Comparing all of my four resources, the one I like most is China's First Empire by Loewe. Although I felt the author may have some bias toward Qin Shihuang, I still like to read it. By reading the text, I can even imagine a vivid picture in my mind. However, I believe the book China's First Unifier by Derk, Bodde is the most helpful one for me. Honestly, I have no idea about Li Ssu, and I did not know who he was. After read this book, I learned many things about the man who behind Emperor Qin Shihuang. Worked Cited Derk, Bodde, China's First Unifier, Netherlands: Leiden, E.J. Brill, 1938. E. Zurcher, S.F. Teiser and M. Kern, A Biographical Dictionary of the Qin Former Han And Xin Period (221 B.C. --- A.D. 24), Encyclopedia, United States of America: Cambridge University, 2001. Loewe, Michael. China's First Empire, United State of America: History Today, Sep. 2007.<http://ntserver1.wsulibs.wsu.edu:2061/ehost/resultsadvanced?vid=3&hid=102&sid=c98ccbf9-b644-4a6d-b237-00380b062d80%40sessionmgr110&bquery=(America%3a+History+AND+Life+with+Full+text)&bdata=JmRiPWVjbiZ0eXBlPTEmc2l0ZT1laG9zdC1saXZl>. Qin Shihuang, China Culture.org, Ministry of Culture, P.R. China, 2003.< http://www.culturalink.gov.cn/gb/en_aboutchina/2003-09/24/content_22854.htm>. ?? ?? ?? ?? ...read more.