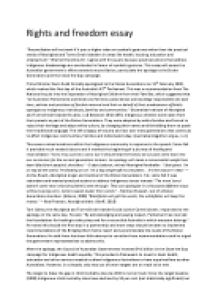 This essay will assess the Australian governments efforts towards reconciliation with Aboriginal peoples, particularly the apology to the Stolen Generations and the Close the Gap campaign.

﻿Rights and freedom essay ?Reconciliation will not work if it puts a higher value on symbolic gestures rather than the practical needs of Aboriginal and Torres Strait Islanders in areas like health, housing, education and employment.? Warren Mundine AO. I agree with this quote because practical actions that address Indigenous disadvantage are overlooked in favour of symbolic gestures. This essay will assess the Australian government?s efforts towards reconciliation, particularly the apology to the Stolen Generations and the Close the Gap campaign. Prime Minister Kevin Rudd formally apologised to the Stolen Generations on 13th February 2008, which marked the first day of the Australia?s 42nd Parliament. This was a recommendation from The National Inquiry into the Separation of Aboriginal Children from their Families, which suggested that ?all Australian Parliaments and State and Territory police forces acknowledge responsibility for past laws, policies and practices of forcible removal and that on behalf of their predecessors officially apologies to Indigenous individuals, families and communities.? (Australian Institute of Aboriginal and Torres Strait Islander Studies, n.d) Between 1910-1970, Indigenous children were taken from their parents as part of the Stolen Generations. They were adopted by white families and forced to reject their heritage and adopt white culture, by changing their names and forbidding them to speak their traditional language. ...read more.

(Pmc.gov.au, n.d.) The target to close the gap in life expectancy by 2031 is not on track. Between 2010?12 and 2015?17, Indigenous life expectancy at birth improved by 2.5 years for Indigenous males and by 1.9 years for Indigenous females (both not statistically significant), which has led to a small reduction in the gap. The Australian Bureau of Statistics (ABS) 2006 estimates show life expectancy for Indigenous Australians to be approximately 17 years lower than the total population for the period of 1996?2001. Indigenous people have poorer health due to a range of factors, such as socio-economic status, quality and accessibility of the health system, risk factor behaviour (tobacco, alcohol, nutrition, exercise), social factors and environmental factors (e.g. over-crowded housing, poor drinking water and sanitation). These are complex interrelated factors which the government need to address. The target to have 95 per cent of Indigenous four year olds enrolled in early childhood education by 2025 is on track. In 2017, 95 per cent of Indigenous four year olds were enrolled in early childhood education. The target to close the gap in school attendance by 2018 is not on track. Attendance rates for Indigenous students have not improved between 2014 and 2018 (around 82 per cent in 2018) ...read more.

It conveys the injustices of British colonisation and how it is difficult to forgive them for what they have done after a mere apology. Korff, J. (2019). 'Sorry' apology to Stolen Generations, Available at: ://www.creativespirits.info/aboriginalculture/politics/stolen-generations/sorry-apology-to-stolen-generations [Accessed 27 Mar. 2019] This is an article sharing both Indigenous and non-Indigenous Australian reactions to Kevin Rudd?s apology throughout polls, print media, and quoted responses. The text?s main strength is it provides multiple perspectives of both Indigenous and non-Indigenous people, some who support the apology and some who don?t. It was relevant to my research because I could use people?s responses to the speech as an example of the community?s views on symbolic gestures versus practical actions. It is written by Jens Korff, the owner and author of Creative Spirits. His work was published by the National Library of Australia in Pandora, Australia?s web archive. They considered it to be ?an important component of the national documentary heritage.? Therefore, this is a credible website with a wide and unbiased coverage of different Australian perspectives. Pmc.gov.au. (n.d.). 1.20 Infant and child mortality | Aboriginal and Torres Strait Islander Health Performance Framework 2014 Report. [online] Available at: https://www.pmc.gov.au/sites/default/files/publications/indigenous/Health-Performance-Framework-2014/tier-1-health-status-and-outcomes/120-infant-and-child-mortality.html [Accessed 28 Mar. 2019]. Closing the Gap Report 2019. (2019). [ebook] Available at: https://ctgreport.pmc.gov.au/sites/default/files/ctg-report-2019.pdf?a=1 [Accessed 28 Mar. 2019]. ...read more.