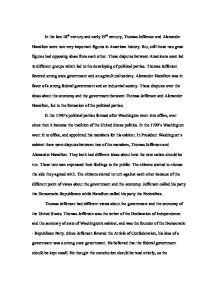 In the late 18th century and early 19th century, Thomas Jefferson and Alexander Hamilton were two very important figures in American history. But, still these two great figures had opposing ideas from each other. These disputes between Americans soon led to different groups which led to the developing of political parties. Thomas Jefferson favored strong state government and an agricultural society. Alexander Hamilton was in favor of a strong federal government and an industrial society. These disputes over the ideas about the economy and the government between Thomas Jefferson and Alexander Hamilton, led to the formation of the political parties. In the 1790's political parties formed after Washington went into office, ever since then it became the tradition of the United States politics. ...read more.

Thomas Jefferson was the writer of the Declaration of Independence and the secretary of state of Washington's cabinet, and was the founder of the Democratic - Republican Party. Since Jefferson favored the Article of Confederation, his idea of a government was a strong state government. He believed that the federal government should be kept small. He thought the constitution should be read strictly, so the government won't have too much power. He thought the power should be given to the common people. He had deep faith in the people, especially the American farmers. He disliked the world of industry and favored the agricultural economy. According to Jefferson "When Americans exchange their farmers for factories and their open spaces for slums, when they pile upon each other in cities, then individualism will be lost and people will consume each other." ...read more.