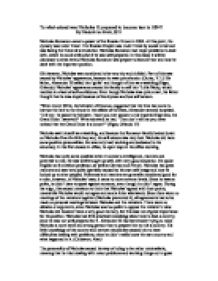 To what extend was Nicholas II prepared to become tsar in 1894?

To what extend was Nicholas II prepared to become tsar in 1894? By Diederik ten Brink, IS11 Nicholas Romanov came to power of the Russian throne in 1894. At this point, the dynasty was under threat. The Russian Empire was under threat by social unrest and was facing the threat of a revolution. Nicholas Romanov had major problems to deal with, which he could still solve if he was well prepared. In this essay it will be discussed to what extend Nicholas Romanov was prepare to become tsar and how he dealt with the important position. Of character, Nicholas was considered to be very shy and childish. Part of this was caused by Nicholas' appearance, because he was quite slender. (Gurko, V. I.) His father, Alexander III called him 'girlie' and thought of him as a weakling (Figes, Orlando). Nicholas' appearance caused his family to call him 'Little Nicky, which resulted in a lack of self-confidence. Even though Nicholas was quite smart, his father thought that he was stupid because of his shyness and low self esteem. ...read more.

Nicholas had great manners and was very polite (partially caused by his own self image and how he looked up to other people). Politeness and manners are generally considered good for a ruler, however, in Nicholas' case; it came to more extreme levels. Since he was so polite, he didn't dare to speak against someone, even though he didn't agree. During his reign, this caused ministers to think that Nicholas' agreed with their points, meanwhile Nicholas would not agree and send a letter afterwards. Since there were no meetings of the ministers together (Nicholas prevented it), all agreements had to be made on personal meetings between Nicholas and the ministers. There were no debates or arguments, since Nicholas was too polite to oppose the minister's view. Nicholas did however have a very good memory, but this was not of great importance for his position. Nicholas had little practical knowledge about how to lead a country, since he was not well prepared for it. ...read more.

One could almost say that Nicholas was a power vacuum. He didn't trust others to do the job, but was scared to do the job himself. This behavior really caused nothing to get done in the Russian Empire. Nicholas' personality, the way in which he was brought up and his miniaturist way of ruling had major impact on Russia. The impotence of Nicholas caused little reforms to be put through and deepening of the revolutionary crisis. While Nicholas II was very willing and devoted to the autocracy, he was poorly prepared and not up for the scale of the problems in Russia at the time. Nicholas was not prepared for the job because he hasn't had the education required for someone to rule a whole country by himself. Figes, Orlando. A People's Tragedy: The Russian Revolution 1891-1924. London: Random House Group Limited, 1996. Print. Gurko, V. I., Figures and Features of the Past: Government and Opinion in the reign of Nicholas II, Stanford, 1939. Print Chubarov, Alex. "Nicholas, Czar II." Allrussias.com. 2009. Web. 10 Apr. 2012. <http://www.cartage.org.lb/en/themes/biographies/mainbiographies/n/czarnicholas/2.html>. Simkin, John. "Tsar Nicholas II : Biography." Spartacus Educational. Spartacus Educational. Web. 10 Apr. 2012. <http://www.spartacus.schoolnet.co.uk/FWWtsar.htm>. ...read more.