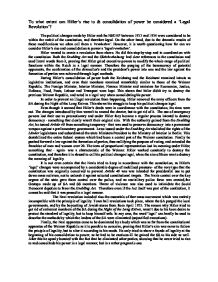 To what extent can Hitler(TM)s rise to and consolidation of power be considered a Legal Revolution(TM)?

To what extent can Hitler's rise to & consolidation of power be considered a 'Legal Revolution'? The political changes made by Hitler and the NSDAP between 1933 and 1934 were considered to be within the ambit of the consitution, and therefore legal. On the other hand, due to the dramatic results of these modifications we often call them a 'revolution'. However, it is worth questioning how far can we consider Hitler's rise and consolidation to power a 'legal revolution'. Hitler wanted to create a revolution from above. He did this step-by-step and in coordination with the constituion. Both the Enabling Act and the Gleichschaltung had clear references to the constituion and used literal words from it, proving that Hitler gaied executive powers to modify the whole range of political functions within the Reich in a legal manner. Therefore the purging of the bureaucracy of potential opponents, the combination of the chancellor's and the president's power into one and the law against the formation of parties was achieved through legal methods. ...read more.

With the authority gained from the Enabling Act, he turned Article 48 from something temporary - that was used to preserve democracy- into a permanent weapon against a parliamentary government. Laws issued under the Enabling Act abolished the rights of the L(nder legislatures and subordinated the state Ministers-President to the Ministry of Interior in Berlin. This destabilized the entire federal system which had been a central part of the Weimar consitution. Finally he pushed forward a law against the formation of parties, thus nullifying the purpose of voting, and extended the franchise of men and women over 20. The term of proportional representation lost its meaning under Hitler, something that - again- was a characteristic of the Weimar. Hitler worked constantly to destroy the constitution, and therefore it is absurd to call his political changes legal, when the aim of them was to destroy the meaning of legality. It is not even certain that the Nazis tried to keep in accordance with the constitution, as Hitler's 'legal' changes were accompanied by a considerable degree of mobilised pressure - of the very type that the constitution was originally conceived to prevent. ...read more.

The reason why Hitler tried to get rid of extremist members of the SA during the Night of the Long Knives, wasn't due to his keen desire to protect the standard of legality, but to keep himself safe. In any case, the word 'legal' can hardly be used to describe the methods by which the leaders of the SA were eliminated (unjustified executions). Finally, the Nazi apparatus came to be dominated by a body which was as far from the constitutional apparatus of the Weimar Republic as it is possible to conceive, proving that Hitler's aim was never to follow the priciple of legality, but to alter it according to his needs. He only tried to show a fa�ade of legality at the beginning of his consolidation to power, as he had to be cautious till he gained the SS to his side as well. After this he openly boasted with the fact that he eliminated other parties, showing that he never tried to rise to and consolitade his power in a legal manner, but in a rather pragmatic one. ?? ?? ?? ?? ...read more.