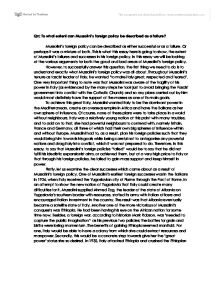 To what extent can Mussolini(TM)s foreign policy be described as a failure?

Qn: To what extent can Mussolini's foreign policy be described as a failure? Mussolini's foreign policy can be described as either successful or as a failure. Or perhaps it was a mixture of both. This is what this essay here is going to show, the extent of Mussolini's failures and successes in his foreign policy. In this essay we will be looking at the various arguments for both the good and bad areas of Mussolini's foreign policy. However, to successfully answer this question, the first thing we need to do is to understand exactly what Mussolini's foreign policy was all about. Throughout Mussolini's tenure as fascist leader of Italy, he wanted 'to make Italy great, respected and feared'. One very important thing to note was that Mussolini was aware of the fragility of his power in Italy (as evidenced by the many steps he took just to avoid bringing the Fascist government into conflict with the Catholic Church) and so any plans carried out by him would most definitely have the support of the masses as one of its main goals. To achieve this great Italy, Mussolini wanted Italy to be the dominant power in the Mediterranean, create an overseas empire in Africa and have the Balkans as her own sphere of influence. ...read more.

Unfortunately, this is where the good areas of Mussolini's foreign policy end. In fact, one of the clearer failures of his foreign policy is his relationship with Nazi Germany. Although Italy and Germany did not have a very good relationship in the early 1930s due to the Stresa Front, which basically stated that there would be an alliance by Italy, Britain and France against Germany should she try to have an anschluss with Austria. However, starting from the mid-1930s, Mussolini began to look upon Germany with kinder eyes. After all, Germany was another fascist state which had had its own problems with France and Britain dating back to the post-World War 1 (WW1) treaties. The first clear sign of failure was Italy's involvement in the Spanish Civil War in 1936. At first, he played a relatively minor role in the revolution, but started to pour resources into the war when heavily criticised by the French. This was an ill-fated move as Mussolini had never thought about the consequences of the war neither did he think of how it would and could be won without great losses to Italy. As it was, Italy lost 4000 men through the war and a staggering 8 billion lira. ...read more.

Italy did not have any of the requirements needed to achieve Mediterranean dominance and overseas imperialism simultaneously: far-sighted leadership, and efficient and modernised armed forces, a committed populace and lastly, an advanced industrialised economy geared for war. This led to many eventual defeats later on during his rule. In Western eyes, Mussolini did have to be treated more cautiously because of its cordial relations with Nazi Germany. However, it was precisely because of this reason that the Western powers could not completely trust Mussolini. He could not be an impartial mediator and he was obviously not a leader who promoted peace, as shown by his various military campaigns. As for Germany, Hitler did prefer having Mussolini as an ally but frankly speaking, did not really take Italy as a serious military power. Italy's stance would not have mattered much in Hitler's 'grand scheme', as can be seen by him carrying out the anschluss and the takeover of Czechoslovakia without even consulting Italy. Whatever early successes Italy had in its foreign policy were later foreshadowed by these much more dire failures which in themselves. He might have been able to keep public support through his early successes such as Albania and Ethiopia, but WW2 was the deciding factor on his fate. All his public support vanished and he was eventually executed. In most ways, that could be the ultimate failure of all. ...read more.