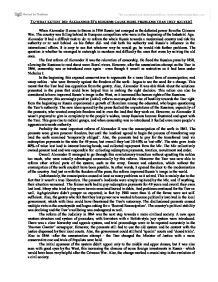 To what extent did Alexander II's reforms cause more problems than they solved?

TO WHAT EXTENT DID ALEXANDER II'S REFORMS CAUSE MORE PROBLEMS THAN THEY SOLVED? When Alexander II came to throne in 1956 Russia just emerged as the defeated power from the Crimean War. The country was falling behind its European competitors who were in the beginning of the Industrial Age. Alexander II had a difficult task to do: to reform the whole Russia towards a modernised country and risk his authority or to wait behind -as his father did- and risk both his authority and Russia's influence in the international affairs. It is easy to see that whatever way he would go, he would risk further problems. The question is whether he managed to outweigh in numbers and difficulty the ones that arose by solving the old ones. The first reform of Alexander II was the relaxation of censorship. He freed the Russian press by 1858, allowing the Russians to read about more liberal views. However, after the assassination attempt on the Tsar in 1866, censorship was re-introduced once again - even though it wasn't as restrictive as it had been under Nicholas I. In the beginning, this exposed conservatives to arguments for a more liberal form of emancipation, and many nobles - who were formerly against the freedom of the serfs - began to see the need for a change. ...read more.

The zemstva did for the first time allow initiative from below so ending the administrative monopoly of officialdom. These new local organisations were better suited to respond to local needs and in many places they did important work in education and public healthcare, improving the lives of every-day Russians. It also created the 'Third Element' by appointing often liberal minded professionals, like scientists and teachers. However, these reforms endangered the Tsar's autocracy, as people from the 'Third Element' were the ones who could question Alexander's power and provide alternatives to people. In this way the radical intelligentsia emerged, people dedicated to the idea of creating a fairer, more equal society. Their dedication often expressed itself in uncompromising hatred for the tsarist regime, and in 1881 it led to the Tsar's assassination. Also, due to the heavily biased voting system, very few or no peasants entered the regional zemstva, this increasing the gap between the two social classes and furthermore dividing Russia. Also, attempt at national organisation was stopped. All these arouse government hostility. A reform in the army was absolutely necessary after the shameful defeat in the Crimean War. Alexander II extended conscription to all the classes, not only peasants - with partial exemptions for the educated. Service was reduced from 25 to 6 years, plus 9 in reserve, which could be further reduced according to the educational level of the soldier. ...read more.

Solutions for whom?' It seems that from most of the reforms the peasants benefited little, even after their so called emancipation, they were further flooded in problems as now they even had to pay for their land. However, the nobles gained financially from this reform. The reform of the army and of the education probably brought the peasants some advantages. However, the fact that poorer people could be educated represented a danger for the Tsar, as radical students emerged from campuses. The reform of the local government gave more power to the gentry, but it lessened the Tsar's control over his people. Therefore it is very difficult to assess whether Alexander II's reforms caused or solved more problems. Overall it may seem that Russia was better off, as it reached a certain financial stability, its army and economy improved and there were some important steps made towards a more civilised society. However, politically it was in ruins, the great emancipation was nothing but a reform that changed the lives of the serfs into worse, the army was still defeated in 1905 by Japan and Russia's agriculture was in deterioration as well. A top on this, from 1866 Alexander II started taking back from the freedoms that he allowed, which ultimately caused his death and the end of the Tsarist Russia. The problems that his reforms caused were more far-reaching than the solutions it solved, and therefore we can conclude that his reform caused more problems than it solved. ?? ?? ?? ?? ...read more.