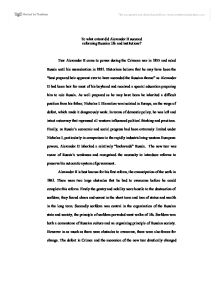 To what extent did Alexander II succeed reforming Russian life and institutions?

To what extent did Alexander II succeed reforming Russian life and institutions? Tsar Alexander II came to power during the Crimean war in 1855 and ruled Russia until his assassination in 1881. Historians believe that he may have been the "best prepared heir-apparent ever to have ascended the Russian throne" as Alexander II had been heir for most of his boyhood and received a special education preparing him to rule Russia. As well prepared as he may have been he inherited a difficult position from his father, Nicholas I. His nation was isolated in Europe, on the verge of defeat, which made it dangerously weak. In terms of domestic policy, he was left and intact autocracy that repressed all western influenced political thinking and practices. Finally, as Russia's economic and social progress had been extremely limited under Nicholas I, particularly in comparison to the rapidly industrializing western European powers, Alexander II inherited a relatively "backwards" Russia. The new tsar was aware of Russia's weakness and recognized the necessity to introduce reforms to preserve his autocratic system of government. Alexander II is best known for his first reform, the emancipation of the serfs in 1861. There were two large obstacles that he had to overcome before he could complete this reform. Firstly the gentry and nobility were hostile to the destruction of serfdom, they feared chaos and unrest in the short term and loss of status and wealth in the long term. ...read more.

Before 1864, the local government consisted of the landlord fulfilling the state requirement for taxation and recruitments with the occasional intervention of troops to put down peasant disturbances. New structures had to be devised to replace the old local government and take on the new responsibilities. The choice to create elected assemblies was a cheep way of extending the bureaucracy, fulfilling the needs of the people without creating more jobs and salaries, which Russia could not afford to pay. The introduction of zemstva, Russian for local assembly, was ground breaking as it endorsed the elective principle as opposed to the autocratic and bureaucratic principles in Russian politics. The dumy was the urban equivalent of the zemstva. These local assemblies implied that Russia could have a representative political system as the assembly officials were elected every year. This was the beginning of proper local governments. The zemstva operated on a two-tier system, district and the higher-level provincial guberniya zemstva. Although they may have seemed democratic, they were actually a concession to the local gentry and had no intention of being remotely democratic. The votes were heavily weighted towards the local landowners they had 42% of the seats in the lower tier and 74% in the upper tier while the peasants had 38% and 10.5% respectively. Furthermore, although they were elected annually they only met for long enough to elect a standing council to undertake local administration Although the zmestva and dumy have been criticized for their ...read more.

The government abolished the ancient, inefficient system of tax farming where financiers could 'farm' taxes, collecting them in whatever quantity they saw fit and giving the government only the money it required and pocketing the surplus. This was replaced with an excise tax, the equivalent of the British value added tax (VAT). Finally, a state bank was founded in 1860 followed by municipal banks and savings banks in hopes of stabilizing the rouble With little private capital or western entrepreneurship to fall back on, the Minister of finance was able to establish momentum and revolutionize the Russian economy. After his assassination in 1881, Alexander II was given the title of 'Tsar Liberator' in recognition of his emancipation of the serfs. Throughout his rein Alexander II, well aware of the need to modernize Russia, put forward several reforms. His first reform, the emancipation of the serfs, legally changed the status of Russian peasants however very little changed in terms of their lifestyle or freedom. A similar example of this was the education reform; the government gave the universities freedom only to attempt to take it away when subversive ideas began to form. However not all the reforms failed in changing Russian life and institutions. Alexander II was able to revolutionize the justice system in Russia, give Russia the proper base of local government for the first time and completely modernize the army. In essence, the 'Tsar Liberator' succeeded in reforming some aspects of Russian life and institutions and fell quite short of the mark for others. ...read more.