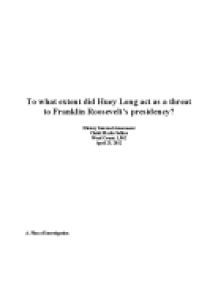 To what extent did Huey Long act as a threat to Franklin Roosevelts presidency?

﻿To what extent did Huey Long act as a threat to Franklin Roosevelt?s presidency? History Internal Assessment Chelsi Marks-Sellers Word Count: 1,962 April 25, 2012 A. Plan of Investigation The following historical investigation will evaluate the proposition of Huey Long proposals during the Great Depression. The scope of this historical investigation will range from 1933-1935. In order to determine Long?s true intentions, it is necessary to inquire to what extent did Huey Long act as a threat to Franklin Roosevelt?s presidency? In order to assess this question, it is necessary to present evidence through research of primary sources, such as Long?s radio broadcasts and criticism from Roosevelt and other opposition. In addition, the investigation will concentrate on secondary sources, such as journal articles and novels that provide information on Huey Long?s presidency and his view of Roosevelt?s New Deal. Huey Long?s critique of Roosevelt?s New Deal and his desire to challenge Roosevelt for leadership during the Great Depression, which is shown in his decisions to charismatically propose his own plans. B. Summary of Evidence Huey Long presented himself in such an emphatic matter during his plans of action, causing him to gradually become recognized as a threatening political challenge to Franklin Roosevelt. Long first appealed to society when he took office as governor of Louisiana in 1928. In 1930, Long was elected to the Senate of the United States, but he felt it was his duty to continue to improve the infrastructure in Louisiana before he took on another leadership role.[1] Therefore, Long waited to take office as Senate in 1932, joining the Democratic Party. ...read more.

Roosevelt certainly saw Long as a threat and he attempted to weaken Huey?s influence in America.[15] Roosevelt purposefully offered some of Huey?s rivals to the positive of regulating federal spending. In addition, Roosevelt ordered the Federal Bureau of Investigation to investigate Huey?s investments, contracts, and other transactions.[16] Roosevelt used his campaign to establish a nationwide political pole in order to sum up the amount of supporters Huey Long gained over the course of the campaigning process.[17] Roosevelt proposed his Second New Deal in 1935,[18] reflected some of Huey Long?s ideas. Roosevelt?s Works Progress Administration Act was seen as an exact imitation of Long?s infrastructure programs he established in Louisiana before being elected Senate. Also, Roosevelt?s Social Security Act was similar to Huey?s proposal of old-age pensions.[19] Huey quickly realized that although he had acquired a great amount of supporters, both parties refused to implicate his programs.[20] Therefore, in the 1936 election, Long ran against Roosevelt as a third party challenger.[21] Although Huey did not gain enough support to win, he continued to campaign. He began receiving an ample amount of threats and on September 8th of 1935, Huey Long was shot and killed in a walkway of the Louisiana State Capitol and died a couple of days later.[22] After his death, many condolence letters were sent to his children expressing their appreciation of Longs contempt for his loss.[23] C. Evaluation of Sources Although Huey Long?s, ?Share Our Wealth? plan was unveiled in 1934, Long?s speech over a nationwide radio broadcast was recorded in Baton Rouge, Louisiana, in which Long proposes his exact economic plan in 1935.[24] The ...read more.

Therefore, Roosevelt felt it was his only option to propose ideas similar to Long?s in order to gain back supporters that he lost. Huey Long became the central topic of many Americans and it is evident that his opposition turned to threatening his life because he was seen to acquire too much power.[32] Huey had a great chance at winning against Roosevelt in the 1936 Presidential election, but his opponents would not let this happen. The fact that Huey would not give up irritated his opposition. The only way to get him out of the way was to threaten his life and resort to violence. Therefore before he was killed because he was seen as a major threat to Roosevelt?s presidency[33]. After his death, condolence letters were sent to him, suggesting that even though he is dead, he still has many supporters who will live to remember his legacy.[34] E. Conclusion By analyzing Huey Long and Roosevelt?s plan of actions during the Great Depression, it is possible to sum up this historical investigation. Huey Long was a definite threat to Roosevelt?s presidency through three factors. These factors include his ability to have courage to critique Roosevelt?s New Deal. Secondly, the release of his own ?Share Our Wealth? plan took a great amount of attention away from Roosevelt?s campaigning. Thirdly, his ability to strive for democracy and run against Roosevelt as a third party shows his true courage to obtain power. Lastly, his charisma, which helped him earn a great amount of supporters. All of these factors played a role in Huey Long?s rise to power, causing him to be recognized as a threat to Roosevelt?s proposals. ...read more.