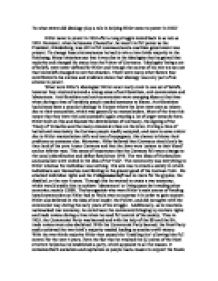 To what extent did ideology play a role in helping Hitler come to power in 1933?

To what extent did ideology play a role in helping Hitler come to power in 1933? Hitler came to power in 1933 after a long struggle rooted back to as late as 1919. However, when he became Chancellor, he wasn't in full power as the President, Hindenburg, was still in full command and a coalition government was present. To change these circumstances he had to win a two-thirds majority in the Reichstag. Many historians say that it was due to his ideologies that he gained that majority and changed his status into the Fuhrer of Germany. 'Ideologies' being a set of beliefs, were never defined for Hitler and through the course of his rein we can see that his beliefs changed to suit the situation. There were many other factors that contributed to his success and evidence shows that ideology was only part of his scheme to power. What were Hitler's ideologies? Hitler never really stuck to one set of beliefs, however they revolved around a strong sense of anti-Semitism, anti-communism and lebensraum. Anti-Semitism and anti-communism were emerging ideas at that time when during a time of hardship people needed someone to blame. ...read more.

On the other hand, there were other factors helping Hitler to rise to power such as the ineffectiveness and flaws of the Weimar Republic. To begin with, the system was set up on the wary proportional representation system. Through this was favourable as it allowed smaller parties to be heard it did not have a limit to the number of parties that could be part of the government thus not allowing a majority in the government. With no majority, there was a confusion of ideologies and coalition policies slowed down the decision process tremendously. This made the public unhappy, as the Weimar Republic created no noticeable change to Germany. Moreover, the Republic was setup after the signing of the Treaty Of Versailles. Many people called them the "November Criminals" and the apparent hatred for the treaty was instead directed towards the government. Article 48, which gave Hindenburg the President, complete power, added to this sense of fall through as through this he could appoint and dismiss any Chancellor he wished. Thus, in the early in 1930's in a span of three years Germany experienced six different Chancellors. This political instability ensured that German politics was as insignificant as it could be on the society it served. ...read more.

This aura attracted many people and caused a rapid increase in party membership. Along with that, Hitler used the intrinsic inclination towards the military that the Germans had by establishing the SS and the SA. These not only created a sense of power and control but as they were terrorising organisations, they intimidated people during election time to vote for the Nazi party. Hitler was a strong leader with will power and a demonic want to succeed. Though ideology was part of his climb to power, it was one of the many others, which together contributed to his rise. He used circumstances to his advantage and created a clean path to power for the Nazi party. By 1933, he had established ties with people like Ludendoff, which granted him military strength and major industrialists, which stabilised him economically. His stature was increased though the effectiveness and outstretch of propaganda of the party through regions and his skill as a leader. Hitler was a political genius who realised that Germany was naturally progressed towards authoritarian regimes and was not ready, or more rightly, willing to take the path of democracy. His rise to power was systematic and powerful. It is inarguable that Hitler truly worked hard for his position and was politically worthy, if not ideologically, for the position as Fuhrer of Germany. ...read more.