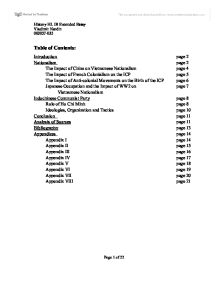 To what extent did nationalism contribute to the creation and expansion of the Indochinese Communist Party?

Table of Contents: Introduction page 2 Nationalism page 2 The Impact of China on Vietnamese Nationalism page 4 The Impact of French Colonialism on the ICP page 5 The Impact of Anti-colonial Movements on the Birth of the ICP page 6 Japanese Occupation and the Impact of WW2 on page 7 Vietnamese Nationalism Indochinese Communist Party page 8 Role of Ho Chi Minh page 8 Ideologies, Organization and Tactics page 10 Conclusion page 11 Analysis of Sources page 11 Bibliography page 13 Appendices page 14 Appendix I page 14 Appendix II page 15 Appendix III page 16 Appendix IV page 17 Appendix V page 18 Appendix VI page 19 Appendix VII page 20 Appendix VIII page 21 Introduction The year 1945 is the most important date in the history of Vietnam. Two weeks after the Japanese occupation ended, the Indochinese Communist Party (ICP) and its associated groups seized power from what remained of the "Japanese-sponsored royal government. On 2 September, Ho Chi Minh, proclaimed the Democratic Republic of Vietnam"1 with himself as president of a provisional government headquartered in Hanoi. The ICP is the currently ruling Marxist-Leninist Communist Party and the only legal political party in Vietnam. To understand how the Indochinese Communist Party (ICP) came to power, it is necessary to analyze the creation and expansion of nationalism. In this case, nationalism is the patriotic feeling or principles that have created and led to the creation and expansion of the ICP and finally to creation of the Democratic Republic of Vietnam in 1954. There are other factors that have also contributed to the creation and expansion of Indochinese Communist Party such as the role of Ho Chi Minh, communist ideology and the tactics used by the party itself. This topic is of particular interest as the creation and expansion of the ICP is often seen as an offshoot and duplicate of Russian and Chinese communism. ...read more.

Furthermore, most of their recruits were "students, soldiers, low-level bureaucrats, women and small-business owners"14. Their members being urban intellectuals had no rural, ethnical, broad or popular support. These two principal weaknesses made it easier for the French to hunt down. Phan Boi Chau was paroled to home confinement in 1940 and by the time of his death he was a relic of the past. Most of the party members were arrested and many were executed after a failed and futile armed rebellion, February 1930. The failures and annihilation of these nationalist parties cleared a pathway for the creation of the Indochinese Communist Party, February 3, 1930. The latter to counter their predecessor mistakes enlisted a broader segment of the population in a more disciplined front specifically adapted to suit Vietnam's need and nationalistic features. In this case this disciplined front was Marxist-Leninism directed by Nguyen Ai Quoc (Ho Chi Minh). Nonetheless, the primary efforts of the Indochinese Communist Party (ICP) would have not been enough to topple the French colonial system, thus the impact of World War Two and Japanese occupation cannot be neglected when examining the rise of Vietnamese nationalism central to the creation and expansion of the ICP. Japanese Occupation and the Impact of WW2 on Vietnamese Nationalism When French Indochina fell in 1940 to the Japanese (appendix VI), Ho Chi Minh quickly came to realize that French rule had been fatally undermined. Japanese occupation was no better then that of the French as Vietnam was still exploited to suit Japan's own interest and profit through the administration of the Vichy French. To this end, the French collaborationist government of Vichy and the Japanese from 1941-5 used every means necessary to destroy the revolutionary movement. For example, the policy of rice collection was used to cause hunger and starvation among the Vietnamese population "in order to dampen their revolutionary spirit ... food supplies for the French themselves and the Japanese"15. ...read more.

usually beginning with French colonial rule over Indochina. Nevertheless, all these sources all have values and limitations with regard to a historian studying this particular time period. The main value of all these documents is that they provide in their appendix a series of documents and official papers dating from the period 1920 to 1979. This provides the historian with precise information of the time as well as an analysis. This allowed for the use of quotations in my Extended Essay and can be used to verify the veracity of the authors' writings and evaluations. Nonetheless, there are some limitations to all the sources used. They usually only provided extensive and analytical information on the Vietnam War and on the role of the United States, not appropriate to my Extended Essay. All my sources were as such except for Vietnam and America a documented history by Jane Franklin, Contested Spaces Conflict in Indochina by Thomas Cantwell and The Columbia Guide to the Vietnam War by David Anderson. They provided documents and information on the totality of Vietnamese History usually starting with Chinese influence over Vietnam. Thomas Cantwell provided a detailed and lengthy account of the whole of Vietnamese History with pictures and other visual illustrations that were of great value to the creation of my appendix and use of quotations. However, Cantwell's account was limited in conclusions and analyzes whilst relating the events as done by David Anderson. Even if David's division of themes and topics greatly facilitated my research, his accounts were either too brief or limited in the amount of information given. This only provided a concise historical background with numerous conclusions and limited amount of data. Usually, written by Western authors and not being able to access documents written in Vietnamese, the sources could potentially be biased not adopting a neutral stance whilst relating the events. To be able to analyze correctly to what extent did nationalism contribute the creation and expansion of the Indochinese Communist Party, I would have to use both Western and Vietnamese sources. ...read more.