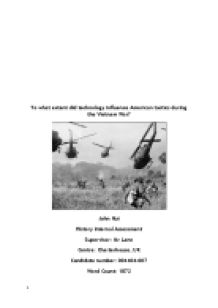 To what extent did technology influence American tactics during the Vietnam War?

﻿To what extent did technology influence American tactics during the Vietnam War? John Hui History Internal Assessment Supervisor: Mr Lane Centre: Charterhouse, UK Candidate number: 004404-007 Word Count: 1872 Session: May 2012 Contents Section A (Plan of investigation): Page 3 Section B (Summary of Evidence): Page 3-4 Section C (Evaluation of sources): Page 4-5 Section D (Analysis): Page 5-7 Section E (Conclusion): Page 7-8 Section F (Bibliography): Page 8 Section A: Plan of Investigation Between 1955 and 1968 the Vietnam War was fought between the pro-communist Vietminh and the United States of America, widely considered an international superpower due to its capability for nuclear warfare. This IA will examine the extent to which American military technology influenced American tactics against the Viet Cong. Other factors significant to American strategy include international reactions to American intervention[1], and the public opinion of both American civilians and politicians[2]. Word Count: 150 Section B: Summary of Evidence In 1950, the US was considered an international military superpower[3]. American forces intervened within Vietnam to preserve French colonial interests[4] and to contain the perceived threat of a Communist political foothold in Vietnam[5]. A popular concept known as ?The Domino Theory? developed in America which proposed that the spread of Communism in one country would spread Communism to neighbouring countries[6]. ...read more.

Infantry were often armed with massive M60 light machine guns and M19 60mm grenade launchers, which gave them massive advantages in firing rates against Vietminh forces[17]. Having said that, in the years before 1964 and after 1968 technology was utilized to a much lesser degree. As mentioned before, the US was reluctant to deploy troops throughout the early 1950s due to the risk of being drawn into a prolonged conflict, further depleting resources lost from the Korean War[18]. The provocation of China also led many US leaders such as Eisenhower and Johnson to counsel moderate measures to avoid provoking China: Having expressed concern in 1955 that the US would use Vietnam as a foothold to retake borderline states such as Taiwan[19], the Chinese reiterated their position in 1965 by sending over 320,000 troops to support the Vietnamese against aerial attacks[20]. The fact that American forces were ordered not to engage them shows that the destabilization of international relations limited the Americans? response. The very existence of an American presence in Vietnam was originally motivated by a need to maintain French colonial interests and later to prevent a perceived Communist invasion, suggesting that American strategy was balanced between maintaining international relations whilst confronting a military threat. ...read more.