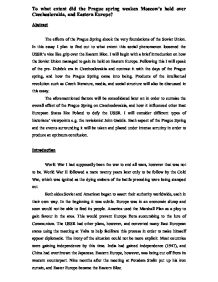 To what extent did the Prague spring weaken Moscow(TM)s hold over Czechoslovakia, and Eastern Europe?

To what extent did the Prague spring weaken Moscow's hold over Czechoslovakia, and Eastern Europe? Abstract The effects of the Prague Spring shook the very foundations of the Soviet Union. In this essay I plan to find out to what extent this social phenomenon loosened the USSR's vice like grip over the Eastern Bloc. I will begin with a brief introduction on how the Soviet Union managed to gain its hold on Eastern Europe. Following this I will speak of the pre- Dubcek era in Czechoslovakia and contrast it with the days of the Prague spring, and how the Prague Spring came into being. Products of the intellectual revolution such as Czech literature, media, and social structure will also be discussed in this essay. The aforementioned factors will be consolidated later on in order to surmise the overall effect of the Prague Spring on Czechoslovakia, and how it influenced other East European States like Poland to defy the USSR. I will consider different types of historians' viewpoints e.g. the revisionist John Gaddis. Each aspect of the Prague Spring and the events surrounding it will be taken and placed under intense scrutiny in order to produce an optimum conclusion. Introduction World War I had supposedly been the war to end all wars, however that was not to be. World War II followed a mere twenty years later only to be follow by the Cold War, which was ignited as the dying embers of the battle preceding were being stamped out. Both sides Soviet and American began to assert their authority worldwide, each in their own way. In the beginning it was subtle. Europe was in an economic slump and soon would not be able to feed its people. America used the Marshall Plan as a ploy to gain favour in the area. This would prevent Europe from succumbing to the lure of Communism. The USSR had other plans, however, and converted many East European states using the meeting at Yalta to help facilitate this process in order to make himself appear diplomatic. ...read more.

They had practically handed Dubcek a carte blanche. He made a number of economic reforms; a de-regulation of the market of sorts. However, what the government really needed was to find some economic stimulus in order to de-centralise the economy.13 The changes had begun to change society. People no longer lived their lives in fear as they once had. They openly criticised the government in various forms i.e. radio, television, and the newspaper. Books were written criticising the government. People read and were able to think for themselves. Historian Jeremy Suri said that "Prague in the late 1960s was the Paris of Eastern Europe"14. "The entire society was rapidly reasserting itself"15 using an array of mediums. In 1967 the Writer's Congress of Czechoslovakia had spoken out against censorship, but could not really act because of the tight restrictions still imposed upon them by Novotn�'s government. However, the peoples of Czechoslovakia had begun to pry at the iron fist of the USSR. Slowly etching away at the surface, in 1968 (after Dubcek came to power) there came a proliferation of expression in a number of different forms. There was talk of the ousting of Socialism from Czechslovakia. However, this was more hype than anything substantial. Socialism's hold on Czech society was beginning to weaken though. It was particularly evident because of Dubcek's policy of socialism with a human face. Censorhip had been 'toned down'. This was the "first step towards a new democratic model of Socialist society"16. The media played a large part in catalysing the Prague Spring in the sense that it cultivated new ideas, and exploited the somewhat translucent nature of the Dubcek administration. It was surreal. People now had free speech after decades of Soviet suppression. Broad casters came to prominence and were seen as icons17. Even during the time of Soviet occupation there was constant coverage of the situation by 'Free Czechoslovak Radio'..; People, in particular rightist groups18, began to embed their viewpoints in the media whether it was the newspaper, public radio, or even television freedom of speech was omnipresent. ...read more.